By Ed Lavandera and Wayne Drash 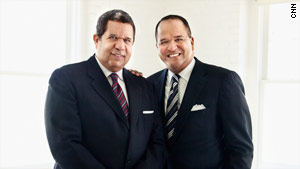 The two men have made millions over the years, on everything from real estate to television companies.

St. Louis, Missouri (CNN) -- Michael and Steven Roberts didn't have two quarters to rub together a couple of decades ago. Now, the two African-American business leaders estimate their holdings -- from hotels to TV stations -- are worth $1 billion. One St. Louis hotel they own once barred black people.

Steven Roberts, left, and his brother, Michael, own a St. Louis theater that once segregated African-Americans.

Black folks need legacy. We have to have examples of successes in order for us to be able to let the generations to come know that many of the successes that occurred by African-Americans in this country can be seen and pointed out and can be emulated," says Michael Roberts, the chairman and CEO of The Roberts Companies.

Michael and his brother Steven, who is three years younger, stroll through their office, complete with wood-paneled doors, large leather chairs and a pool table fit for a king. Their office sits along a busy street in St. Louis called Kingshighway.

"They used to call us the Kings of Kingshighway, because we own so much on this street," Michael Roberts says.

Their office is the culmination of hard work and a can-do American business attitude to strive for greatness. They launched their business from a historically black neighborhood in north St. Louis.

Video: Making it big in business

From a one-room office, they created an empire now made up of 76 companies and 1,100 employees, many of them minorities. They own commercial real estate, TV stations, hotels, telecommunication companies and more. The name Roberts adorns all their properties.

"We weren't rich. We weren't poor, but we just never had any money," Michael says of their upbringing.

They like to tell their story, encouraging people with new ideas to chase their dreams. If you don't have money, they say, don't let that stop you.

"We tell folks, learn it, get your hands dirty -- you know, a little sweat equity," says Steven Roberts, the president of The Roberts Companies. "For that college student, for that future entrepreneur ... we're saying understand what your passion is, and understand what your product is, too."

Michael Roberts chuckles. He notes that his younger brother has always been good at "putting the meat on the bone." He says he likes to tell youths and college students: "What would your life be like if you could eliminate the fear of failure, and where would you be at this point in life?"

There will be times, he says, when you will stumble, but don't let those hiccups get you down. "If you eliminate the fear of failure and if you use every moment to its fullest extent -- a very existential concept -- then you are able to take your ideas, your dreams, your aspirations, and you can pursue them with courage and confidence and bravado."

The brothers operate on a simple business philosophy: You diversify or die. And they don't believe in a full retirement. "What other animal retires?" Michael Roberts says. "If a lion retires today, tomorrow morning he becomes his brother's breakfast."

They point to their father as exhibit A. At 86, he still comes to the office that his sons named after him, the Victor Roberts Building, a large complex complete with restaurants and retail stores. He worked 39 years in the Postal Service before retiring in the 1980s. He now keeps a keen eye on his now grown boys. He refuses a paycheck.

"I suggest anyone who has a father," Michael says with a laugh, "please hire them, because you can get them for free."

The two brothers also have served in public office, elected to the St. Louis Board of Alderman in the late 1970s.

They recently walked through The Roberts Orpheum Theatre in downtown St. Louis. It symbolizes their quest for a legacy. Decades ago, their mother and other black people were only allowed to sit in the highest balcony. Now, the brothers own the theater.

They stood on the stage and scanned the empty seats. Again, they laughed. "Mom can sit wherever she likes," Michael Roberts said.