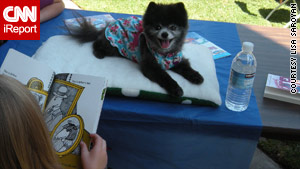 And the dogs really do pay attention, according to Lisa Saroyan. Her pomeranian, Minnie, has been a reading therapy dog for about a year in Fresno, California, as part of Therapy Dogs International's "Tail Waggin' Tutors" program. Minnie, who weighs in at only five pounds, sits calmly but alertly on a table for an hour at a time as children take turns reading to her.

"She really does sit there and stare at them," says Saroyan. "And sometimes as they're turning the pages, she follows the page with her nose, and the kids just light up. She just knows what she's supposed to do."

And therapy dog owners say the pups love the program as much as the kids.

"They kind of benefit each other," says Saroyan. "[Minnie] just craves that human attention, and [the kids] really benefit from her just sitting there and listening."