When co-workers go from friend to foe 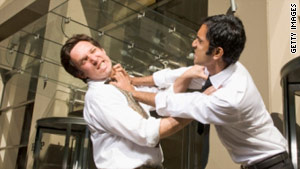 Making friends too quickly or having a friendship fail can cause you trouble at work, experts say.
STORY HIGHLIGHTS
RELATED TOPICS

(CAREERBUILDER) -- Growing up, plenty of people dished out advice about what kind of job to get. I was told to find a way to get paid doing what I love. I was also told to find a job that paid the bills because I'd resent my passion if it were my job. Each person had a story to prove why their advice was right.

Ultimately, I listened to no one and just did what felt right. As a result, I realized one size does not fit all for career advice.

The same goes for befriending the people you work with, or bringing friends into the workplace. For some people, friendship and professionalism go hand-in-hand. For others, not so much. And for certain workers, friendship was integral to the workplace until things went very, very wrong.

"It can be very good or very bad -- depending on a number of factors, including the personalities of the people who are friends and their relationship in the workplace.

For example: Is one person insecure, jealous, needy or passive-aggressive? Is one supervising the other? Are they in a very competitive environment? Are there wide discrepancies between their salaries or earning power?" says Irene S. Levine, author of "Best Friends Forever: Surviving a Breakup with a Best Friend."

"Because of the potential downsides, such friendships should be approached slowly and judiciously to avoid disappointments. You need to allow them to unfold slowly so you have a good sense of the other person -- and know whether the person is trustworthy and has good judgment," says Levine.

If only some people got this advice early in their careers.

At a previous job, Crystal Brown-Tatum was a receptionist but had formed a professional friendship with a sales executive -- one of the few people in the office who showed her respect. That all changed when the sales executive became involved with Brown-Tatum's fiancé, who was a manager at the same company.

As you might expect, the friendship suffered, and so did her career. As a result, Brown-Tatum was put on paid leave to "cool down" and her access to e-mail and the premises was restricted.

"By the time the affair came out, [my fiancé] was relocated to a New York office while [the sales manager] and I remained in the Houston office," she says. "When I returned to work, we were all advised by HR not to discuss the relationship or face severe consequences. I had to go out of my way to avoid her but everyone in the office knew. It was extremely awkward."

Another consequence of the situation was how distrusting she became with colleagues, even after she had moved on to a new employer. She was especially hesitant around the women in the office. Ultimately she started her own company, Crystal Clear Communications, because the thought of working in a similar environment was too much for her.

Leslie Jacobs of Les Mess Organizing Cards also found her work life go from peaceful to turbulent in a brief moment. She was friends with an office manager at a previous employer. They were regular lunch friends and spent much of their time together.

Then one day the office manager stopped talking to her. Years before the friend had done something similar, but the silent treatment didn't last long so Jacobs dismissed it as a one-time event. This time it was permanent -- no explanation and no opportunity for Jacobs to understand what was going on.

"I asked her to talk to me -- let's talk this out. She refused," Jacobs remembers. "She would only talk to me in a very businesslike way. But, as office manager she had the power to make my job easy or not -- and she chose not."

Not surprisingly, there was a round of layoffs shortly after and Jacobs was let go from her job. Although she was told it was a financial issue, Jacobs knew that wasn't the case -- especially when she saw the organization throw a party for 50,000 attendees. She never found out the reason for the sudden change of heart, but she knows former colleagues are being told a significantly different story to explain Jacobs' departure.

Sometimes the friendship falls apart after the professional relationship ends, which can be just as hurtful. That's what happened to Linda Athans, now a marketing manager at Mangrove Employer Services. For a previous company she was a director and had hired an assistant from another department. She established a mentor/protégé relationship with the assistant.

"The two of us not only reshaped the entire department for the company, but also became great friends in the process ... almost sisters," Athans says. "We saw each other outside work frequently, shared secrets and could be both professional and silly with each other. I was even in her wedding!"

Unfortunately, Athans' position was eliminated and she left work permanently on a Friday afternoon. She didn't hear from the assistant until Monday morning, and then it was only to ask about projects Athans had been working on. She was apparently filling Athans' role and made no attempt to approach her as a friend.

"Needless to say I was upset at the callousness --ýÿ I had just lost my job of four years.[I] told her that I didn't work there anymore and she should get direction from the VP," Athans says. "She got angry with me, hung up, and that was that."

They've seen each other since and their interaction has gone from cordial to nonexistent. For Athans, the lesson learned was that friendships shouldn't exist within the office.

"Most of what we shared revolved around work and being in the same situation. But once I left, it was obvious that we didn't really have that much in common and were two very different people. Sometimes I am reminded of her and remember the good times we had fondly, but that relationship definitely changed how close I get to people in the workplace."

What do you do if your friendship with a co-worker is going south? And what if it's beyond repair? Levine has some tips for workers:

"The first step would be to communicate, without casting blame, to see if a minor misunderstanding can be straightened out," Levine advises.

"Perhaps it is a question of establishing boundaries with which both friends feel comfortable. Depending on what happened, for example, two friends may decide to only be friends in the workplace or to only be friends outside of work, limiting their conversation about work."

"If the friendship is falling apart, you might want to act cordial but slowly pull back, spending less time and sharing fewer intimacies with the individual. You still want to act friendly and greet them in the workplace. The last thing you want to do is to draw other people into your conflict [or] misunderstanding," Levine suggests.

Understand the kind of friendship you have

"Workers need to remember that not all friendships stick," Levine reminds.

"Most are transient, and you don't want to do anything to jeopardize your employment and reputation, particularly in this economy. On the other hand, friends in the workplace can be your greatest collaborators, cheerleaders and shoulders to cry on and re-energize."

Editor's Note: CNN.com has a business partnership with CareerBuilder.com, which serves as the exclusive provider of job listings and services to CNN.com.