Civility: A thing of the past?

(CNN) -- A politician, an athlete and an entertainer. What do they have in common? Some would say rude behavior. In less than a week, millions of people witnessed displays of anger and rage that have many wondering whether decorum is a thing of the past. 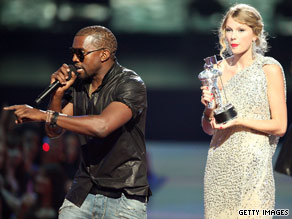 "I think we're seeing a decline in our protocol and etiquette skills,'' said Pamela Eyring, director of the Protocol School of Washington.

"It was an obvious breach of decorum. There's a time and a place for everything, and that was obviously not the time or the place," said Sen. John Cornyn, R-Texas.

Wilson apologized to Obama but has balked at the idea of giving a formal apology before the House of Representatives.

Just days later, in a heated display of frustration over a questionable call, tennis star Serena Williams threatened a line judge at the U.S. Open.

The outburst, like Wilson's, was seen by millions on live television. Williams later issued an apology and has tried to put the incident behind her.

Watch: Where have our manners gone? »

One day after the Williams meltdown, it was Kanye West's turn. But this wasn't a fit of rage; it was an outrageous display by the rapper toward singer Taylor Swift.

The 19-year-old was accepting her award at the MTV Video Music Awards ceremony Sunday when West took the microphone from her hand and told the audience that singer Beyonce Knowles' video had been better. West was booed off the stage.

Eyring says these three high-profile incidents serve as reminders to public figures and regular people alike to watch their behavior.

"They're mentors, like it or not. They are mentors, and they need to show their good side," she said.

It's one thing for a public figure to have a bad or very bad moment. But more and more Americans are wondering whether rudeness has become the norm in society in general.

"Everybody's lashing out for no apparent reason. It's starting to be this virus that's going on these days now," said David Stuart of Washington.

How did it get to this point? Eyring blames technology. "Blogging, texting, the twittering; we're finding that people aren't focused on their people skills any longer, and so they're doing outbursts. They're just saying what they feel and what they want to say, when they want to say it."

Eyring is quick to point out that not all of society is lacking in people skills. But she does stress a return to simple gestures: opening a door for someone, giving up your seat for an elderly person or simply saying "thank you."

"I think actions are more powerful than words. We have to learn this, and you can do it, and it doesn't cost anything. You can do it. It costs nothing to be nice or civil or polite. It's easy, and it makes you feel good."