(CNN) -- Most Latinas have goals to graduate and get professional jobs, but challenges including discrimination and gender stereotyping undermine their chances of success, a new survey shows. 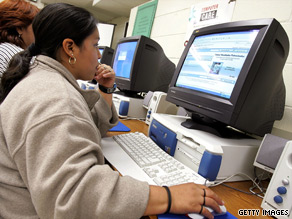 Many Latinas doubt their chances for academic and career success, the report found.

The discrimination -- sometimes from teachers and fellow students -- affects the young women's self-confidence and performance, leading to lower graduation rates, according to the report released last week by the National Women's Law Center and the Mexican American Legal Defense and Educational Fund.

"About 80 percent of the students surveyed want to graduate from college and perhaps go further," the report said. "And 98 percent reported that they wanted to graduate from high school. Yet the dropout rates of Latinas are extremely high."

The survey was based on 335 responses received from schools and programs in various parts of the country, with follow-up interviews and focus groups, plus a review of existing research, according to the report.

Out of the young women surveyed, one-third do not expect to achieve their educational goals for various reasons, it said.

"Many Latinas are influenced by family and societal expectations, often based on stereotypes of Latinas as submissive underachievers and caretakers," the report said. "When these stereotypes are internalized, they may cause Latinas to doubt their chances for academic and career success."

They also face a series of other challenges, including poverty, immigration status, limited English and lack of parental involvement, it said.

Most don't attend early childhood education programs because their schools don't have enough resources, according to the report.

Students who are undocumented or whose parents are in the United States illegally face anxiety caused by instability, and do not have the financial advantages and opportunities their American counterparts have, it said. Their parents are unfamiliar with the education system and thus do not take part in school activities.

"Limited English proficiency can make students more likely to fall behind and increase the risk of dropout," the report said. "Moreover, many Latinas lack relationships with role models in the community who can help them to set goals and to envision themselves reaching those goals regardless of their family circumstances."

The report examines some of the reasons for the disparity and lagging performance, and seeks to improve their graduation rates and chances of success.

-- More outreach to Latinas in schools, including providing them with role models.

-- College preparation by schools for Latinas, with funding from Congress.

-- School use of comprehensive, age-appropriate material to teach sex education to avoid the rising pregnancy rates among teen Latinas, and additional support for those who get pregnant.

At 45 million, Latinos constitute the largest minority group in the United States, and it has a growth rate twice that of the general population. According to projections, by 2025, one-quarter of American teens will be Latinos.

All About Hispanic and Latino Issues • Education