ATLANTA, Georgia (CNN) -- The company name flashed and swirled around the darkened convention hall as the music began to pump. 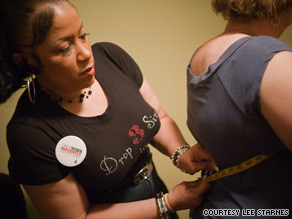 Before squeezing into Body Magic, a before-and-after volunteer is measured by Monica Bennett.

A man dressed in designer duds strutted across the stage to the tune of The O'Jays' 1970s hit, now the theme song for "The Apprentice."

"If you want to get paid, you've got to get up on your feet," he called out. "They say money doesn't grow on trees. Well, I've got a money tree in my backyard, and Ardyss planted it there!"

With that the faithful rose and hollered, the applause crescendoed, and the smiles - and dreams - spread wide.

See how the sales pitch works »

Few issues pique public interest more than opportunities to make money and achieve beauty. The estimated 3,000 people from around the country who streamed into the Georgia World Congress Center in Atlanta in early August were a testament to that. They came to rally around Ardyss International, a Las Vegas, Nevada-based direct sales company that makes a fortune off undergarments.

Body Magic, the company's flagship girdle-and-corset combo, which retails for $140 plus tax and shipping, can "bring your butt back to high school fine," the man on stage announced.

You can wear it and get thin, the claims go, or you can sell it and get rich.

The company's other products include the Angel Bra, Panty Reshaper, undergarments for men, nutritional supplements and skin-care items.

"I've only been involved for two months, and I have a check with a comma in it," said Robbyn Washington of Snellville, Georgia.

While many such companies are legitimate, others smack of pyramid schemes, prompting legal disputes and investigations by consumer protection agencies such as the Federal Trade Commission.

The FTC has no complaints about Ardyss International on file. But the Better Business Bureau, with which Ardyss is not accredited, has given the company an F rating, saying 16 complaints over the past 36 months have gone unanswered. An Ardyss executive and spokesman, Mike Potillo, told CNN the company wasn't aware of these complaints and would be in touch with the BBB to clear this up.

As is the case with all multilevel marketing ventures, no matter what they're selling, experts say consumers and prospective distributors should proceed with caution.

'Say whatever you want'

The Body Magic motto is emblazoned on T-shirts, pins and bumper stickers: "Drop 3 sizes in 10 minutes."

Proponents say it can create hourglass curves, shaving off inches and weight permanently.

"Every eight seconds a woman looks in the mirror and wants to be smaller," said Dorothy Cook, who's often credited for making the business, founded in Mexico, a multilevel marketing hit in the United States. "Once you wear it and take it off, you lose inches. Every woman must have one."

Sonja King, 38, did not attend the convention but said she's worn her Body Magic about four days a week for the past two months. The Atlanta-area woman said she has seen results but wonders whether it's because she can barely eat when she wears it.

"It's not comfortable," she said with a laugh. "But I had to go to a formal affair recently, and that Body Magic came in handy. I was slammin' in that dress!"

Beyond looking good, distributors raved about improved posture, a claim that left chiropractor Robert Hayden uneasy. The Griffin, Georgia, man, who hadn't examined the garment, said he's seen the atrophied muscles of those who've relied too much on simple lumbar support belts.

"The muscles that hold you erect will have no need to work," if worn with regularity, he said. "They'll go to mush."

More striking, however, were the medical claims distributors made about Ardyss garments and Le' Vive, the company's top-selling nutritional product.

They ascribed restored bladder control and diverted surgeries to Body Magic. One distributor lifted her blouse to reveal not only the über-girdle but also her Angel Bra, which she said can protect a woman from breast cancer. Many thanked Body Magic for putting their organs "back in place."

The stories passed around of those saved by Le' Vive, a drink said to be rich in antioxidants, included tales about warding off diabetes and arthritis. But distributors also said a woman was cured of Bell's palsy. Another, they said, had Lupus, was given six months to live and is now in remission. And then there was the unnamed blind man who distributors claimed began to see.

"Someone said that to you?" asked an audibly stunned Potillo, the Ardyss executive who oversees the American market.

In a written response sent later, Potillo said the company "makes no health claims, medical claims or any type of claims on any of our products in any way. ... If someone has made a claim on one of our products, we have internal policies and procedures in place to deal with that."

The issue of distributors saying what they shouldn't is one of the biggest challenges in multilevel or network marketing operations, said Peter Mingils, president of the Distributor Rights Association, a Texas-based nonprofit that works on behalf of multilevel marketers.

"Even though you're an independent contractor, it doesn't mean you can say whatever you want," he said.

It's this enthusiasm, however, that drives the company's success, said Clark Howard, the HLN money expert.

"If people really believe in it themselves, and they go out and convince others, then that is in itself a legitimate multilevel" marketing business, he said. "If people are making false promises about a product or service, then that comes out in the wash."

The hope, the dream

Antonio Díaz de León, the Ardyss founder and president, walked into the convention center where he and his family were treated like rock stars, eliciting gasps as cell phone cameras came out.

In the past six months the business has grown by 600 percent and 100,000 active distributors, Díaz de León, a native of Mexico, said through a translator.

"We've changed many lives," he said. "Families are getting financial freedom."

In times of recession, interest in these kinds of business opportunities spikes, Howard, the HLN money expert, said.

"It doesn't matter what the product is, what the service is, you always have the same thing: People talking about the hope, the dream and the money," he said.

Dorothy Cook, draped in jewelry, wouldn't say how much she earns. At last count, though, she claimed she had nearly 80,000 distributors in her downline. Another "platinum president," the highest level that can be achieved in this business where everyone has a title, said thanks to her downline of 15,000 distributors, she is bringing home more than $55,000 a month. One can only only assume Cook, nicknamed "The Godmother," makes more.

"All you have to do is get here, and God will do the rest," she told a group at the convention.

But Potillo, of Ardyss, which includes about 140,000 active distributors, said it's not that easy and called Cook's earnings "an extraordinary experience, not the norm."

To become a distributor, people are encouraged to buy a starter kit for $299.

"If you have to borrow the money, do what it takes," Donna Bingham told a group that gathered recently in an Alpharetta, Georgia, home. "The only way [the business] doesn't work is if you don't work."

That line of encouragement made law professor Stephen Calkins wary.

Calkins suggested any prospective multilevel distributor consult tip sheets to analyze the credibility of a company first. The FTC has a consumer alert, as does the Direct Selling Association.

Excitement about these opportunities needs to be tempered with reality, Howard said. While the "pep rally" may make people think they're all in line to make $20,000 a month, he said that's not how these businesses play out.

"There will always be a small number of people who hit grand slam homeruns virtually every day. But most everybody else will make little or nothing, and usually many will actually lose," he said. "Don't believe it's paved in gold. There are a lot of speed bumps and a lot of dead ends."

All About U.S. Federal Trade Commission