Commentary: It takes courage to end a recession 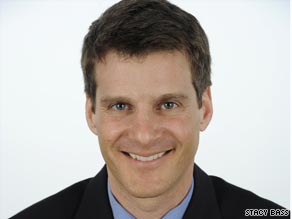 NEW YORK (CNN) -- Brad Baugh lives in Savannah, Georgia, where he buys and renovates houses. He told me two things the other day that exposed a great opportunity in this treacherous recession -- and that may even shine a light on our way out of it.

The first thing he told me didn't surprise me: he's not buying anything.

It's not that he can't find good deals; he showed me several reasonably priced buildings he'd like to buy. The problem is the bank.

Here's the painful part: Even the bank thinks the deals are good. It's just that, for the moment, they've stopped issuing loans. See, they're still afraid they might not survive this recession. They're collecting on old loans, recapitalizing the bank. It's not that they don't want to do the deal. It's just that they don't feel secure enough to spend the money investing in it. Better to be safe.

Which means the bank won't make money on new loans. And Brad won't buy and renovate the building. And the seller won't sell the house. And the economy won't move.

We're clearly not out of the recession yet.

The second thing Brad told me did surprise me. Shocked me actually. He told me that he needed to install a sprinkler system in one of his buildings, a project that costs tens of thousands of dollars, but the sprinkler system guy never returned his calls. It's been four weeks since Brad left his last message and still nothing. Why won't this guy call Brad back? Doesn't he want the work?

After thinking about it, I realized that I was having the same experience as Brad. One morning, I came home to a beautiful doodle drawing made by the young artist Sophia Harrison Bregman, our 4-year-old daughter. The only problem was that she used a small rock as her paintbrush and the side of our minivan as her canvas. I know, cute, right?

So I called the guy at the body shop and asked him when I could bring in the car. Three weeks at the earliest, he told me. Three weeks?

A few days earlier, in an unrelated incident, I asked my insurance agent for a quote on new homeowner's insurance. When I called him to discuss it, he never returned my call. Eventually, when we got in touch a week later, he told me he was on vacation but no one -- not his secretary, not his voicemail, not his e-mail -- told me.

Still, after speaking with him, I decided to go ahead. So I called him again. His secretary promised that he or a colleague would call me back. I'm still waiting.

Why, in a recession, aren't people tripping over themselves to get new business?

In some cases, they're simply lazy or they just don't care. But I'd like to think those cases are rare. In other cases, such as the sprinkler system guy in Savannah, they have a monopoly. Perhaps they figure they can't lose the business, so what's the rush?

But none of those reasons account for why service seems to have declined in this recession. At a time when it should be at its best, it seems it's at its worst.

Remember the bank that wouldn't give Brad his loan? They're afraid to spend or invest their money. They'd prefer to save it. Well, it turns out that lots of businesses are acting that same way. Over the past year or two, businesses have been reducing expenses, avoiding new investments and laying people off.

It turns out that some businesses aren't responsive because they can't be. They simply don't have the staff. Whole layers in organizations are missing. And the staff they do have are taking on more responsibility and getting less training.

Even when demand exists or in some cases rises, businesses aren't hiring more people. The auto body shop is getting more customers who, rather than buy a new car, are keeping their old one a few more years. But it's been a tough few years and they'd rather keep their expenses low and make whatever profit they can.

Which just might be the great opportunity of this recession as well as our way out.

At a time when record numbers of people are out of work, there's a palpable need for better service. If a new sprinkler guy appeared in Savannah and answered Brad's call, he'd get the job. If an auto body shop were willing to take my car tomorrow, I'd give it to them.

And the bar has never been so low. If you want to sell insurance, simply let me know when you're on vacation and you'll have a leg up on the person I'm using.

This is a great time to get involved in a service business. Especially repair businesses. People are keeping their items longer. And the job of fixing a washing machine or a car or a roof isn't in danger of being shipped off to China.

The suspension fork on my mountain bike recently died, and I brought it to several bike shops, none of which would repair it. "That bike is 15 years old," they all said in one way or another, "you need to buy a new one."

But I didn't want to buy a new one. So I kept asking around until I met Estella at Eddie's Bicycle Shop, a tiny hole in the wall. She repaired it with enthusiasm. Now she gets all my business.

Companies who are understaffed would do well to start hiring and training. This is an opportune time for smaller companies and even people who are out of work to compete against more established concerns by promptly, politely and effectively responding to customer needs.

Recessions get worse because people are afraid to spend money. And fear is contagious; if you're afraid, then I become afraid.

But courage is contagious as well. And it's courage that will stop this recession: The courage to start businesses and to invest in the ones that already exist. To hire people and to train them.

The demand is there. It's the courage to meet this demand that will distinguish the winners in this ever-changing economy.

All About Business • Recessions and Depressions • Real Estate