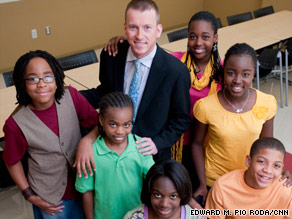 Clark, formerly a schoolteacher from North Carolina, founded the academy with money he earned from his book titled The Essential 55, which detail Clark's 55 golden rules for success -- in and out of the classroom.

Together with co-founder Kim Bearden, Clark transformed a decaying factory in a rough part of Atlanta, Georgia, into a state-of-the-art educational model for middle schools across the country. See newsmakers and iReporters on race, challenges, solutions for black America