By Malaak Compton-Rock
Special to CNN

Editor's note: Malaak Compton-Rock is founder and director of The Angelrock Project, "an online e-village promoting volunteerism, social responsibility, and sustainable change." One of her initiatives, "Journey for Change: Empowering Youth Through Global Service," will be seen as part of CNN's "Black in America 2." Her first book is being published by Broadway Books in May, 2010, titled, "If It Takes a Village, Build One: How I Found Meaning Through a Life of Service to Others and 100+ Ways You Can Too." 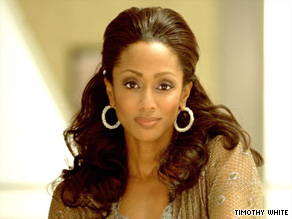 (CNN) -- In the words of my mentor and America's foremost child advocate Marian Wright Edelman, founder and president of The Children's Defense Fund, it's time to "raise a ruckus people, it is time to raise a ruckus!"

CNN's "Black in America" raised many critical issues facing African-American people in this great country of ours. It was not pretty, it was not flattering, but it was very, very frank. The show delved into the negative issues that have plagued the African-American community for generations, i.e., crime, education, single parent families, drug abuse and the like.

People got mad. People sent many e-mails and letters to Soledad O'Brien and CNN and cried foul. People said "Black in America" was not consistent with the lives of many African-American people and was one-sided. Blogs and Web sites popped up all over the place where people "raised a ruckus" about the content of the show.

I was almost apoplectic with the amount of criticism for "Black in America" without critical, thought provoking commentary about how each person can do their part to make a difference to change the very startling and distressing issues facing most African-American children and adults in America.

On a typical day in the lives of black American children:

And on a typical school day for black children in America:

And consider that in America,

[Statistics are from the Children's Defense Fund's Child Research Data.]

This week, Soledad O'Brien investigates what African-Americans are doing to confront the most challenging issues facing their communities. You'll meet people who are using ground-breaking solutions in innovative ways to transform the black experience.
Wednesday 9 p.m. ET, Thursday 8 p.m. ET

It is okay because the truth hurts, especially when it is seen by 16 million people. In fact, most of the images shown in "Black in America" do not represent my personal life or the lives of my children. But because these issues face my brothers and sisters in my collective African-American family, they concern me, they hurt me, they belong to me, and I will own them.

We know that as African-Americans we have come a long way. We know that we are doctors, lawyers, CEOs, philanthropists, politicians, and even the president of the United States of America. And yes, it would do our children a lot of good if these images were portrayed more frequently in the media. But this does not change the very real issues facing African-American people portrayed in "Black in America."

And frankly, with so many of our people struggling, we can't just celebrate our achievements -- we must make it a priority to work on the most critical and urgent matters in our community. As I always say, "The blessed and the best of us, must take care of the rest of us."

So why did the criticism make me so mad? Because so much of it was unaccompanied by real ideas, thought-provoking suggestions, plans of action, or inspiring initiatives or solutions. How can you complain if you are unwilling to join the fight?

How can you get mad, if you are disinclined to make a difference in someone else's life? And why would you take the time to write an accusatory e-mail to Soledad O'Brien instead of writing a letter to your representative in Congress demanding health care for all children and pregnant women, increased funding for schools, or new initiatives to increase black-owned businesses in black neighborhoods?

"Black in America 2" will offer many solutions to the ills facing African-American people. I think it will make the naysayers happy. But it will only make me happy if the naysayers "raise a ruckus" by joining the fight to better the lives of all black folks.

The opinions expressed in this commentary are solely those of Malaak Compton-Rock.