(CNN) -- Wendy Duren thought she did everything right. 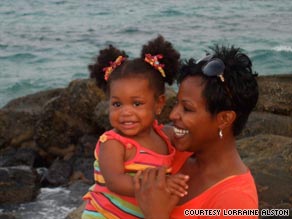 Wendy Duren says she doesn't get as much sleep but loves her adopted daughter, Madison.

She broke off relationships with men who didn't want to settle down. She refused to get pregnant out of wedlock. She prayed for a child.

Duren's yearning for motherhood was so palpable that her former fiancé once offered to father a child with her. But he warned her that he wasn't ready for marriage.

"I get bored in relationships after a couple of years," he told her, she recalls.

Those events could have caused some women to give up their dreams of motherhood. But Duren, a pharmaceutical saleswoman, didn't need a man to be a mom. At 37 years old, she decided to adopt.

"It's the best decision I could have made in my life," Duren says, two years later. She's now the mother of Madison, a 1-year-old daughter she raises in Canton, Michigan.

"People say I have never seen you so happy," she says, "but it's also the hardest thing I've ever done."

Marriage and motherhood -- it's the dream that begins in childhood for many women. Yet more African-American women are deciding to adopt instead of waiting for a husband, says Mardie Caldwell, founder of Lifetime Adoption, an adoption referral and support group in Penn Valley, California.

"We're seeing more and more single African-American women who are not finding men," Caldwell says. "There's a lack of qualified black men to get into relationships with."

The numbers are grim. According to the 2006 U.S. Census Bureau's American Community Survey, 45 percent of African-American women have never been married, compared with 23 percent of white women. Sound Off: What are the biggest challenges for black families?

Yet the decision to adopt isn't just driven by the paucity of eligible African-American men, others say.

Some of the infertility issues may be related to advancing age or health issues, she says. But the result of not being a mother for many older African-American women is the same: panic.

"Their doctors, friends and family are telling them the same thing: 'You're not getting younger; you better hurry up,' '' Oliver says.

The unfulfilled desire to be a mother can damage a woman emotionally, Oliver says. Her agency provides counseling to prospective mothers who have invested so much of their self-worth into being mothers.

"In many cases, it [the pressure to be a mother] begins to set up feelings of unworthiness, poor self-esteem and the feeling that 'I'm not fully a woman,' " Oliver says.

That pressure can cause some African-American women to rush into a marriage with a man they should not partner with, says Kenyatta Morrisey, a 34-year-old mother of three adopted children in Raleigh, North Carolina.

Morrisey wants to be married, but says she'd rather become a mother now and wait for God to guide her to the right man.

"I am not going to settle and get married just for the sake of being married," Morrisey says. "I'd rather trust God to fulfill all of my dreams instead of relying on a man to fulfill my dreams."

Kaydra Fleming, a 37-year-old social worker in Arlington, Texas, is the mother of Zoey, an adopted eight-month-old girl whose biological mother was young and poor.

"Zoey was going to be born to a single black mother anyway," Fleming says. "At least she's being raised by a single black parent who was ready financially and emotionally to take care of her."

Fair-skinned or biracial children stand a better chance of being adopted by single black women than darker-skinned children, some adoption officials say.

"They'll say, 'I want a baby to look like a Snickers bar, not dark chocolate,' " Caldwell, founder of Lifetime Adoption, says about some prospective parents.

"I had a family who turned a baby down because it was too dark," she says. "They said the baby wouldn't look good in family photographs."

'You have so much love to give'

Skin tone didn't matter to Duren, the pharmaceutical saleswoman. She says she just wanted a child to love.

She was so natural with children that all of her friends predicted that she would be the first to marry, she says. But adoption was "never an option" for her.

"I wanted my genes, my looks to be passed on," Duren says. "I wanted to see me."

Time was running out for her. At 37 years old, Duren had earned an MBA degree, a six-figure income and had traveled widely. But she couldn't find the right man to raise a family.

One man she thought she would marry broke off their relationship because he said he wasn't ready to be a father. Then he had a child out of wedlock with another woman, she says.

"He broke my heart," Duren says.

The persistent heartache ate away at her.

A turning point came when she was playing with her niece and nephews. Her brother, their father, asked her why she didn't adopt a child when there were so many black children who needed adopting.

"You have so much love to give," he told Duren.

Duren didn't have an answer. She then went online and learned about Lifetime Adoption, the agency based in California. The agency referred her to a married woman who already had five children, but says she couldn't afford to take care of another.

The woman put her through an interview process. She asked about her family history; how she would discipline her child; and what she would do if her baby woke up screaming in the middle of the night.

The woman eventually picked Duren. When the woman gave birth, she invited her to the hospital and handed Duren her daughter.

The adoption process -- from the beginning to receiving her child -- took eight months, Duren says. It cost about $15,000.

"It was so smooth," she says of the adoption process.

What single moms lose and what they gain

She suggests that prospective single mothers prepare a notebook that will answer vital questions: Who is going to be the guardian of my child if I get sick? Who are the men in my life that could serve as good role models? Do I have life insurance?

"You might have to give up getting your nails done," she says.

But you gain something better in return, Duren says. Her life is tougher, but its purpose has shifted.

And at times, being a single mother can be scary, Duren says.

And at times, there is the temptation for an open-ended relationship with men to take away a little of the loneliness.

One ex-boyfriend came around one day with gifts for her daughter, Duren says. Duren told him to make it his last visit because he was still seeing another woman who had his child.

She told him she wasn't going to be his woman on the side.

"I refuse to be a woman with a man tip-toeing in the middle of my house late at night with toys for my daughter," she says. "No one is going to disrespect me."

Duren says she still wants to be married. But in the meantime, she can barely wait to get home to see Madison.

Her life is now shaped by purpose, not regret.

"I have someone to hang out with. I can never say I'm lonely," Duren says. "She lies across my stomach every night, and I just stare at her."

All About African-American Issues • Adoption