Hooked on self-help books against her will

OPRAH.COM -- Let me admit it. There was a time, not so long ago, when I thought self-help books were for ninnies. 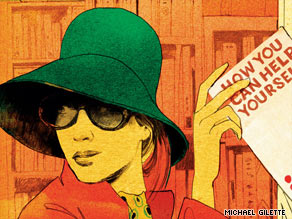 Shopping for a self-help book felt as embarrassing as shopping in an adult boutique, says author.

It's not that I believed that people didn't need help. But having grown up among literary-minded college professors -- my father taught Russian literature, my mother taught journalism and social theory and most of their friends were academics and book lovers -- I assumed that any coping strategies I might need as I blundered through life could be found in the novels that I devoured.

By the age of 6, I had absorbed pioneer stoicism from the "Little House" series: Where there's a will, there's a way. In Jane Eyre, I saw that a bookish loner who was ostracized by coddled children could educate herself into a richer life than her blinkered peers imagined.

What torments could I possibly face that my literary heroes and antiheroes hadn't already thrashed out for me on the printed page?

Besides, my own family background predisposed me to keep a stiff upper lip. Descended from a long line of German-American Midwesterners, I instinctively adopted the family motto: If you're looking for a helping hand, look at the end of your own arm.

This didn't mean that any of us, or all of us (I have two brothers), did not melt down from time to time (well, not my dad...). It meant that when we did, we sorted ourselves out without the benefit of any dime-store manual about the color of our parachutes or about which planets our romantic nemeses came from.

Furthermore, as someone who wanted to write, I superstitiously believed that psychological knots in the mind were best left tangled. I feared that if I were to avail myself of over-the-counter psychology, my thoughts would become so clear to me that my own inner life would bore me. Childhood is the writer's bank balance, Graham Greene had written. What if organizing the accounts emptied it?

And then, early in 1999, in the wake of the old-fashioned husband-hunting manual, "The Rules" -- volumes 1 and 2 -- I came across a breathtakingly elegant, jaded, and useful book called "The Technique of the Love Affair," published in 1928 by a sultry British newlywed in her early 20s named Doris Langley Moore. (She later divorced, I read in an online biography.) Oprah.com: 6 relationship decisions we've made for you

In her author photo, she looked like the luscious, sly heroine of a Noel Coward play. Her book begins with a dialogue between a sophisticated minx named Cypria and a naive damsel named Saccharissa.

"It is desirable for the happiness and well-being of a woman that she should be frequently, or at any rate constantly, pursued," Cypria declared.

At the time, I was young, divorced, and enmeshed in my first serious postmarriage relationship. I wondered: Could I follow Moore's instructions so that, as Dorothy Parker had written when she reviewed the book decades earlier, I might become "successful instead of just successive?"

Cypria's lessons were pointed and unsentimental. Chastity was not necessary to earn a man's loyalty, she explained, but teasing and reticence were de rigueur.

"We dare not give rein to our generosity," she said, "for men, like children, soon tire of what is soon obtained." Saccharissa, Cypria's sappy sidekick, was horrified. "Your cynicism has shocked me," she whimpered. But before long, she was won over.

Captivated by Moore's antique Realpolitik on the battle of the sexes, I proposed an essay to my editors at The New York Times. The piece appeared on Valentine's Day. "At last," I wrote, "a self-help book for women who don't need help, not for women who are past it." Oprah.com: 5 self-help books to read now

Then the phone began to ring. My friends wanted to be walked through "The Technique." (They already had "The Rules.") I lent my marked-up book to one friend; she kept it. I bought another, and soon lent that out as well (it also failed to find its way back to my library). I am currently on my sixth copy.

Later that year, my editors called. Would I review a book called "A General Theory of Love," on the neurological basis of romance? I was leery of falling into a "love" beat. I wanted to write on general, gender-neutral subjects. Would writing about relationship books twice in 12 months pigeonhole me?

But "A General Theory of Love" beguiled me. Like Moore's book, it was written in an artful literary style -- the authors began their explanation of the workings of the limbic brain by reaching back to Pascal's Pensées. See? Not for ninnies.

Also, my postdivorce relationship had just ended, and I was soothed by the doctors' news. The brain forges neural pathways in response to anyone you love, they explained. Over time, the pathways are reinforced by repeat exposure, and before long, tributary associations begin to connect with the main path, deepening and expanding its tracks.

Their message was clear: To haul yourself out of the limbic rut of a lost love, you must forge new neural paths with new people. This insight was useful. It also helped explain why my friends and I had found it so difficult in the past to shake memories of previous relationships.

Even when you want to forget, the limbic brain remembers. Sheepishly recalling the cocky essay I'd written about Cypria and Saccharissa, and the people who "don't need help...," I thought to myself, "Now, just who might that be?"

I had always shunned self-help sections in bookstores, but my respect for the wisdom in those two books began to erode my suspicion of the genre. When a friend confided to me that she was enduring a rending crisis with her parents and siblings, I went online, plugged in some of her concerns, and found a relevant book called "How You Can Survive When They're Depressed."

Walking to my local Barnes & Noble, I mumbled the title to the clerk, afraid of being overheard. He directed me to the proper section. Once there, I looked around furtively to make sure no friends were nearby -- being seen would have felt like being spotted in a particularly sordid aisle of an adult boutique. Oprah.com: What you're really going to want to read this summer

Spying the title, I whisked it under my elbow and hustled it to the register. My friend loved the book. It lacked the lyricism of the bellwether titles that had lured me and had none of the style of the 19th- and 20th-century novels that paint such a detailed map of human woes.

But my friend was not a character marching through a predetermined series of imagined events; she was a real person who needed up-to-date strategies to address problems no novelist could resolve.

This is not to say that I am a complete convert. As a critic, I read a number of books a week, nearly all of them literary novels, biographies or books of social commentary. A self-help book makes it into the mix perhaps once a month.

But two years ago, I became a columnist for the Styles section of the Times, reviewing books on lighthearted, provocative or glamorous subjects that fit the Styles brief. As word went out to publicists, shipments of unsolicited books, many of them volumes of self-help, began to land on my doorstep. Reader, I read them.

Some I laughed at and threw out -- smug men preaching the virtues of open relationships, supermodels sharing man-catching tips (as if anyone so magically endowed had secrets that could be transferred to mere mortals), or scarred veterans of the war between the sexes writing screeds about how to dump pond-scum partners.

Others I thumbed through, getting hooked against my will. These books were, well, helpful. From Dalma Heyn's "Drama Kings: The Men Who Drive Strong Women Crazy," I learned to identify certain kinds of boyfriends I was susceptible to. One was the "Easygoing Guy," or EGG -- "so friendly, so attractive, so subtly, characterologically mysterious," who's "present, but not entirely, not all the way." The EGG, she concluded damningly, was "a performer acting casual in order to ward off relationship."

Wised up by Heyn, I informed my then-boyfriend (an EGG) that I had noticed his evasiveness. "You're in the shower with a raincoat on," I said. "I think it's time to either take off the raincoat or get out of the shower." We are still friends, though we are not "involved."

From Debbie Magids and Nancy Peske's "All the Good Ones Aren't Taken," I learned about women who sabotage their own romantic chances -- the "Old Faithful" who hangs on to an old love and never makes room for a new one; the "Standstill," too shy and cautious to step into the fray and the one I recognized myself in, with a sting of regret, the "Whirlwind Dater" -- busy and social, prone to serially monogamous relationships that have little likelihood of working out long-term.

Anna Karenina left her husband for Vronsky, I thought. If she'd had a career in New York at the turn of the 20th century, would she have put her head on the tracks when the liaison soured, or gone on to ... the next Vronsky? Literature alone is not enough to sort out contemporary mores. "The end" is a fiction. The reality is: What's next?

Last summer, while I was visiting friends at a beach house, the hostess, who'd recently landed her hard-to-get boyfriend after a complicated courtship, sat next to me poolside, explaining what had turned the tide in their affair.

The relationship had been touch and go for a long time, she admitted. But a year before, she had read a review of a book titled "It's Called a Breakup Because It's Broken," which had convinced her that she needed to kill her relationship to save it.

Talking further, we realized it was my review that had led her to the book. She never had believed in self-help books before, she said, but with my apparent sanction, she had dared.

"I was too proud to buy it, so I was reading it in the Barnes & Noble coffee shop, concealing the cover," she told me. "Afterward, for weeks, I did just what the book said, avoiding the places I knew I'd see him, not calling, not being available. I would repeat after myself like a mantra, 'It's called a breakup because it's broken, it's called a breakup because it's broken.. .' "

It's not broken now, for her. I'm delighted if my tardy embrace of the relationship genre can help any of my friends and with any luck, someday I'll acquire the ingenuity to make it work for me.

For the moment, though, I'm still struggling to keep EGGs at bay and waiting with curiosity (not unmixed with dread) to see what wisdom the next unsolicited manuscript on my doorstep may contain. If it's not a self-help book, that's okay: It's high time I reread "The Technique" anyway.

By Liesl Schillinger from O, The Oprah Magazine © 2008

All About Self-Help • Books • Romance