Amid hard times, an influx in real superheroes

(CNN) -- Mr. Ravenblade, Mr. Xtreme, Dark Guardian and hundreds of others. Some with elaborate costumes, others with haphazardly stitched outfits, they are appearing on city streets worldwide watching over the populace like Superman watched over Metropolis and Batman over Gotham City. 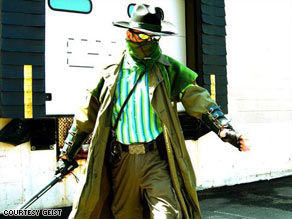 Geist patrols the Rochester, Minnesota, area, with a group of like-minded and similarly dressed colleagues.

As people become disillusioned from financial woes and a downtrodden economy and look to put new purpose in their lives, everyday folks are taking on new personas to perform community service, help the homeless and even fight crime.

"The movement is growing," said Ben Goldman, a real-life superhero historian. Goldman, along with Chaim "Life" Lazaros and David "Civitron" Civitarese, runs the New York-based Web site Superheroes Anonymous as part of an initiative dedicated to organizing and making alliances with superhero groups.

According to Goldman, who goes by the moniker Cameraman because of his prowess in documenting the movement, economic troubles are spawning real life superheroes.

"A lot of them have gone through a sort of existential crisis and have had to discover who they are," Goldman said. People are starting to put value in what they can do rather than what they have, he said. "They realize that money is fleeting, it's in fact imaginary."

Estimates from the few groups that keep tabs put the worldwide total of real-life superheroes between 250 and 300. Goldman said the numbers were around 200 just last summer.

Where to find real-life superheroes

There is a growing diaspora of superheroes worldwide. Here are a few resources.

World Superhero Registry: A virtual who's who of the larger real-life superhero community, including who's active and who's not.

ReallifeSuperheroes.org: A repository of all things supehero, to encourage and set up real-life superheroes in various communities

RLSH-manual.com: So, you want to be a real-life superhero? Need a uniform, you say?

Mr. Ravenblade, laid off after a stint with a huge computer technology corporation, found inspiration for his new avocation a few years ago from an early morning incident in Walla Walla, Washington.

"I literally stepped into a woman's attempted rape/mugging," Mr. Ravenblade said. While details were lost in the fog of the fight, he remembers this much: "I did what I could," he said, adding that he stopped the crime and broke no laws. "And I realized after doing what I did, that people don't really look after people."

Public response to real-life superheroes has been mixed, according to Mr. Xtreme, who founded the Xtreme Justice League in San Diego, California.

"Sometimes it's been really positive with people saying, 'Woohoo, the superheroes are here,' and then the usual barrage, saying 'Oh, these guys are losers.' Other times people will look kind of freaked out, and then sometimes people just don't know what to think about us."

Like Peter Parker kept his Spider-Man identity from his editor boss, Mr. Extreme and Mr. Ravenblade have asked CNN editors to keep their identities secret.

The current superhero movement started a few years ago on MySpace, as people interested in comics and cool caped crusaders joined forces, Goldman said. It goes beyond the Guardian Angel citizen patrols of the early 1980s, as the real-life superheroes of today apply themselves to a broadly defined ethos of simply doing good works.

Chris Pollak, 24, of Brooklyn, New York, can attest to the appeal. "A lot more people are either following it or wanting to go out and do it," Pollack, who goes by the name Dark Guardian, said. By "do it," he means patrol the harrowing streets late at night.

"A lot of kids say they're real-life superheroes [on MySpace]," Mr. Ravenblade said. "But what are you doing? Being in front of a computer is not helping anybody."

Comic book legend Stan Lee, the brain behind heroes such as Spider-Man and the X-Men, said in his comic books doing good -- and availing one's self -- was indeed the calling card for superheroes.

"If somebody is committing a crime, if somebody is hurting some innocent person, that's when the superhero has to take over."

See a photo gallery of some real-life superheroes »

"I think it's a good thing that people are eager enough to want to help their community. They think to do it is to emulate the superheroes," Lee said. "Now if they had said they had super powers [that would be another thing]."

Without super powers, real life superheroes confess to a mere-mortal workload, including helping the homeless, handing out fliers in high-crime areas and patrolling areas known for drug-dealing.

Mr. Ravenblade said he and some of his superfriends would soon be trying to organize a Walk for Babies fundraiser in Portland, Oregon.

"We work with charities that help children," he said. "We think a lot of crimes happen because of people who didn't get a lot of love when they were younger. We do what we can to help that there."

"Homeless outreach is the main thing I like to do," said Chaim "Life" Lazaros, of Superheroes Anonymous. "We give out food, water, vitamins, toothbrushes. A lot of homeless people in my area know me, and they tell us about what they need. One homeless guy said 'I need a couple pair of clean underwear.'"

For Christmas, Lazaros said his group raised $700 in gifts and brought them to kids at St. Mary's Children's Hospital in New York. "They were so excited to see real-life superheroes," Lazaros said. iReport.com: Searching for Cincinnati's caped crusader

"Not a good idea," said Katy Parker, legal director for the ACLU of North Carolina. "Seeing as how there's no citizen's arrest statute [in the state], people who do this are running a serious risk of getting arrested for kidnapping, and being liable for false imprisonment."

"Vigilantism is never a good thing," said Bernard Gonzales, public information officer for the Chula Vista, California, Police Department. He's had some interactions with real-life superheroes. "The very best thing a private citizen can do is be a good witness."

"If you're a real-life superhero you follow the law. If you catch somebody you can't just tie them up and leave them for the cops, that's for the comics. You have to wait for the cops and give them a statement," Mr. Ravenblade said. iReport.com: Cincinnati superhero speaks

While citizens helping out in the community is encouraged, Gonzales said the costumes can go.

But the costumes go with the gig, right down to the do-it-yourself approach to good deeds, including, apparently, recycling.

"The costume I have is simple," said Mr. Xtreme. "I made it myself. I had a graphic designer design it for me and just took it down to the swap meet and had somebody imprint it on for me."

"The mask," an old bullfighter's piece, "I got from Tijuana."