NEW YORK -- Talking excitedly and pacing the front of her classroom, Molly Greer engages her students. "What are different paces you can go when you're reading aloud? Christina?" 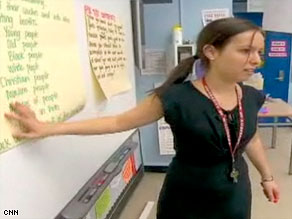 Molly Greer, in her New York classroom, says she now wants to make teaching her career.

On the first day of school, most of the kids in Greer's eighth-grade class could not read at a sixth-grade level. With summer almost here, it's a totally different story for these kids, who according to their school are expected to read at or near grade level. "It is an incredible thing for these students."

Greer graduated with honors from the University of Wisconsin. She arrived at PS 212, the multicultural magnet school in the Bronx, New York, two years ago with a degree in political science and a desire to change the world.

"When I found out about Teach For America," she said, "I realized that teaching would be such an incredible way to make an impact."

Teach For America serves some of the country's poorest public schools in inner cities and in rural areas. It has grown every year since its inception in 1990, sending 20,000 college graduates into the nation's neediest classrooms for a two-year commitment. This year, amid a tight job market, it is more popular than ever.

According to the organization's Web site, their teachers get paid the same salary and benefits as beginning teachers in their area and are paid by the local school district.

Start your day with the most news in the morning.
Weekdays, 6am ET

"We had less competition from Wall Street firms, banks and places like that. It just led a lot of students to really think about what they wanted to do and how they could make an impact," said Kevin Huffman, executive director of Teach For America.

David Stanley went through the program and now recruits for Teach For America. He sees education as this generation's civil rights issue and says there is a direct correlation between the program's popularity and President Obama's call to service.

"With Obama talking about the need for people with talent to go into public education, and the fact that people are still really frustrated that we live in a country where 90 percent of kids in low-income communities don't go to college, and that the best way we can predict the number of prisons we're going to have to build in 25 years is by looking at third-grade reading skills, and so at this particular moment in time, I think it's really about getting our very best and asking them to go to the root of the problem, and the root of the problem is education."

This year, Teach For America will place its largest corps ever.

About 4,100 high achievers from the nation's top colleges will head to classrooms in 34 regions across the country, teaching in places like Boston, Massachusetts; Dallas, Texas; Milwaukee, Wisconsin; Nashville, Tennessee; and in more rural areas such as South Louisiana and the Mississippi Delta.

But schools in Appalachia and elsewhere desperately need help.

Which is why a teachers union says those positions should go to career teachers, not inexperienced recruits who may stay only the required two years.

"It's very hard to justify laying off teachers who have given service to a school system and then turn around and bring in new teachers," argued John Wilson of the National Education Association, the nation's largest professional employee organization for the advancement of public education.

Besides the matter of taking away potential jobs from career teachers, unions question whether these young recruits have the right credentials and experience to handle tough classrooms.

"When you're assigning these teachers to the highest poverty schools, the most challenging schools, these children need the most experienced, the most prepared teachers, and they're not getting them," Wilson said, "and that's quite a disadvantage."

Teach For America maintains that its members go through a rigorous five-week training camp and that while on the job, many pursue a teaching certificate or master's degree in education.

New York will be taking 330 corps members into its schools this year. Vicki Bernstein, who is in charge of teacher recruitment and quality for the city's Department of Education, says teachers coming in through alternative programs, like Teach For America, perform as well as teachers from traditional routes.

"They serve some of our highest-need children, both in terms of neighborhoods that we have difficulty attracting traditionally prepared teachers and in subject areas where we have difficulty, that teacher colleges are not preparing teachers in those areas."

The organization says two-thirds of its recruits stay in academics, like Greer, who now plans on teaching as a career. She says her experience in the classroom has been incredibly rewarding.

"When the kid makes the two years of reading growth and they have the biggest smile on their face because they achieved their goal through their own hard work," she said, "that feeling that I contributed to that student is the best compliment I can get, because I know that kid is in a better place to succeed in their future."

All About Teach for America • National Education Association