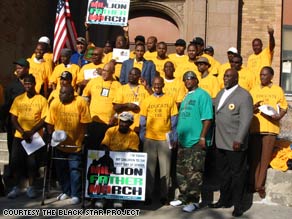 Men participate in the Million Father March to support children going to school.

While the case shook the city, such shootings involving children are no longer rare in the Windy City. Within the current academic year, 36 Chicago-area students were killed.

Essence.com spoke to Phillip Jackson, a well-known political activist in the city and also founder of Black Star Project, a Chicago-based community outreach group, about what is being done to end the senseless shootings involving children.

The following is an edited version of that interview:

ESSENCE: There have been so many shootings and deaths. Please tell us what's happening in Chicago? ESSENCE: Xerox names Ursula Burns CEO

Phillip Jackson: This is a national catastrophe that is happening while we as a country do nothing. We're asking for national attention. This is a pandemic. We will not be able to solve this problem in Chicago unless they can solve this same problem in Houston [Texas] and other cities.

Watch our panelists talk about the growing violence in Chicago »

ESSENCE: The nation's first black president is from Chicago. And you still do not feel like there is enough attention placed on this problem?

Jackson: Newspapers from all over the world have come to our offices this past week to say, "What is happening in President Barack Obama's backyard?"

And 75 percent of the children murdered here in Chicago happened within eight miles of President Obama's former house. So if he doesn't respond as president, and we are hoping he does, he needs to respond as a resident.

ESSENCE: What has been the police response?

Jackson: They've put together a 400-unit gang SWAT team. They're trying to match guns with the gangs. But with all of that they can't stop one murder because they're approaching it from the wrong way. ESSENCE: Obama's time in office

ESSENCE: What is the right way to approach it?

Jackson: Instill strong families and strong communities. Build strong parenting groups. Do you know what has been the best mentoring organization in the United States of America? Street gangs.

Jackson: First of all, they're raising their voices. Number two, they're rallying, they're marching, and they're organizing. That's what this effort is going to take. Number three, they're engaging in recreational programs. ESSENCE: Toledo cops say teen provoked them

So there is more happening at the grassroots level than at the federal level. But those people cannot succeed without support. And that's why we're asking President Obama to bring his resources.

ESSENCE: What is the mind-set of Chicago youth with all of these horrendous acts of violence occurring?

Jackson: Hopelessness, desperation, anger. They live in America. They see how America takes care of the whole world but won't take care of them in the communities in which they live.