How to flirt with text messages

(CNN) -- Dating advice books take a tech-addicted turn with the release of "Flirtexting: How To Text Your Way To His Heart." 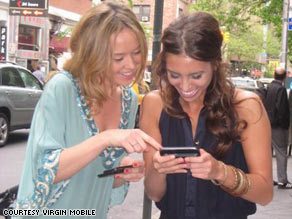 The authors of "Flirtexting," above, say women need to learn how to text their way to love.

The book's co-authors, Olivia Baniuszewicz and Debra Goldstein, seek to explain the dating scene based on the premise that men understand text messages while women need to catch up.

"It's official. Boys text, therefore girls must learn how to flirtext!" they say on their Web site, flirtexting.com.

Baniuszewicz and Goldstein offer up a new etiquette for what they call the "A.C." world of dating -- or "after cells." The pair, who described themselves as "best friends" and "best flirtexters," spoke with CNN about their book, and the text message's role in society.

The following is an edited version of that conversation.

CNN: What abbreviations would you need to know in order to flirt over text messages?

Olivia: So, the things you should avoid when abbreviating is writing "perf" [short for "perfect"] or "brill" [short for "brilliant"] back to a guy. That's fun for girls texting to each other, but not when you're trying to flirtext.

CNN: What's the difference? Why would a guy take it differently?

Olivia: It's just a little girly. You just have to know your audience and speak to it, and that's all flirtexting is all about.

CNN: Do you think the idea that you need to teach girls how to use text messages to pick up guys is a little sexist?

Debra: Sexist? Oh absolutely not. I think it's about empowering women to have the time to come across exactly the way they want and in the best light.

Watch how to enter this new dating world »

Olivia: I think flirtexting is all about empowering. It's all about you choosing your moment. Girls can choose their moment. Girls can decide what they want to get out of this text in order to ask him out, or is it a date, or for him to just meet up with you that night just to have a good laugh, and banter back and forth because you're bored at work. This is all that it's about.

CNN: Are there any people who date exclusively through texts?

Debra: There's a lot of girls who will say, "He keeps texting me but I want him to call" ... I think there is a time when you need to put the cell down and pick up the phone if you really like someone.

Olivia: There's a huge no-no: not to be heavy in your text messages. So a lot of times, I think things like "I want to break up with you" or "I love you" for the first time over text -- you should just not be doing that, and I think that's a mistake a lot of people do.

CNN: What are some other things that shouldn't be discussed over text?

Debra: We say, "Don't kid yourself." If he only texts you past 10 p.m. he's probably just looking to hook up. So girls, watch out for that.

Olivia: True. And the other don't -- I think we've all been there -- is texting under the influence: TUI. [Laughs]. It's true. I think you're out with your girlfriends, you're having a drink, or it's a lonely Sunday evening and you just feel the urge to flirtext a guy. You're going to regret it the next morning.

So find a sponsor, one of your friends that you call or text instead, to kind of wean you off of texting in that moment.

Olivia: Flirtweeting? ... Facebook has really taken that up to a different level and has opened our dating world in a sense to us. Because we could be like, "Oh! Todd is friends with my friend Sara. Let me ask Sara about Todd before I respond back to his message or his friend request. I mean, it's beautiful!

Debra: It is beautiful.

CNN: Could you all give me some personal examples of "dos and don'ts." Either texts that you've sent that you've regretted or things that were sent to you that were really bad.

Debra: Oh absolutely. In flirtexting there are the most important three dos. We call them "The Three Ts."

The first is timing. Just because it's speedy technology doesn't mean you have to be speedy with your response. It's your moment, and we say, "Text when you're ready."

And the second one is thought. You've got 160 characters to create a message that's sure to impress. So take your time, and be sure to make him laugh.

Olivia: It is a delight.

CNN: Do you use the cell phone to talk?

Olivia: I do with my mom, who doesn't text [laughs]. But um, she's slowly learning and then maybe I can just get rid of that altogether.

CNN: How has that experience been, trying to teach your mom how to text? What does she think of it?

Olivia: It's been challenging at first, being that she came from an over-the-phone, old-school approach. She is coming to realize that it's really becoming a cultural phenomenon and it's something that she needs and wants to adapt to.

And she's also single. She knows that she needs to pick up that phone if she wants to be flirtexting and going on dates.

CNN: Are you working on anything after this?