Finding love on a deadline

(CNN) -- Neenah Pickett is on a mission to find love, and it's the kind that has a countdown and can be monitored by any curious voyeur. 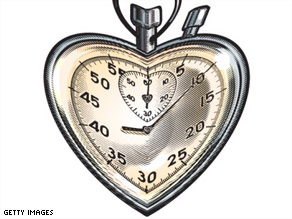 No, she's not the newest bachelorette to feed America's reality TV addiction. The New Jersey media consultant is the brains and heart behind "52 weeks 2 find him!" a Web site dedicated to the search for her husband.

"This whole process has been me really realizing I need to find new ways to be proactive," said Pickett, 43, who might typically get roped into long hours at work or the embrace of a comfortable couch. "I'm past the stage of believing it'll just happen."

So she's putting it all out there on her site. She's blogging. She's asking friends and strangers to weigh in with advice. She's pushing herself to do things and act in ways she never has before.

And a little more than 14 weeks into the self-imposed challenge, she's pretty exhausted.

"I can't believe how hard it is," she said of the journey so far, which has brought her more dates in two months than she'd had in two years. "But that's why the deadline is so important."

Setting goals and working hard -- no doubt, it's the American way.

Singles scramble to avoid renewing online dating subscriptions. They sign up for "speed dating" events to feast on a smorgasbord of quick-and-easy first impressions. TV viewers beat up "The Bachelor" when he regrets selecting the mate he's chosen after a limited number of episodes. And how-to books that promise, within a set timeframe, discovery of the One, fly off bookshelves.

When it comes to matters of the heart, though, does finding love on a deadline make sense?

"It sounds good from a marketing standpoint, but life doesn't work like that," said Blaire Allison, "The Love Guru," who coaches people when it comes to matters of the heart.

She should know. About five years ago, when she was 27, Allison posted a site called "Marry Blaire," with the hope -- albeit somewhat in jest -- that she'd be engaged within six months. Like Pickett, she felt that setting aside time to focus on her personal life was necessary.

"It's OK to say, 'I want to be a partner in a law firm in three years' ... but we're taught to not be open about our desires about marriage, because we don't want to scare off the guy," she said. By being honest, "you end up attracting men who want the same thing as you."

A funny thing happened along the way, though. Allison found "my One," as she calls him, ended up living with the guy and felt essentially married. But she walked away when she realized that she hadn't taken time to know herself. She was young, caught up in the societal pressures and so worried about finding him that she'd never bothered to look within.

Through self-discovery, she fell "totally in love with myself," she said. "Now, I'm ready for a partner in my life again, but there's no rush; there's no urgency; there's no fear."

And nothing is more attractive than a woman who is happy with herself, said Sam van Rood, a "Love Doctor" based in London, England. He said that putting a deadline on the search for love sounds like "a risky approach" and that allowing time for self-evaluation is most important, no matter the gender.

To get where he is, personally and professionally, he had to examine and fix his own mindset when it came to love and romance.

"I used to see an ice queen, and I'd run and impale myself on her cold, bitter heart," said van Rood, 35, who's engaged to be married next year. "Now I have the loveliest, warmest woman I've ever met. In helping myself, I've ended up helping other people."

For 23 years, Janet Page has been offering her own brand of assistance by way of an evening course offered at Emory University in Atlanta, Georgia.

It was traditionally called "I Will Be Married in One Year," but the psychotherapist has changed the course name in recent years to better represent her curriculum and those she wants to reach, including gays and lesbians who can't marry: "Find Your Dream Mate While Finding Yourself: The Twelve-Month Plan."

Too many people are caught up in the fantasy of how love works and happens, she said. They are prepared to work hard on the job or in school, but they haven't done their homework to achieve true and lasting love.

Women, for example, think that outward appearances alone will reel men in and keep them, but men don't give enough attention to how they look, she said. And simple things, like making a conscious effort to smile more often, can make a difference.

Get advice from matchmakers on what to wear, where to go »

"But of course, your best smilers in the world are sociopaths," she added.

Though "love doesn't have a time limit on it," Page said giving people time constraints can be important, especially if what they need to do is some of the hard, looking-within kind of work.

If people were told to spend five years on this process, they'd wait until year four to focus, she said. "You have to give people deadlines."

And it's the deadline of 52 weeks that works for Pickett, who had never allowed herself this time to focus on her heart and the search for love. This "grand effort," as she calls it, is simply her attempt to see whether she can add to what is already "a full life" and one that she loves.

If she doesn't find him by the end of the year, she's prepared to take a year off to re-evaluate where she is.

"At that point, I'll probably need a year off from dating," she said with a laugh.

All About Dating • Romance • Marriage