Mom stands between families and homelessness

VIENNA, Virginia (CNN) -- Despite working three jobs, Carolina Wines and her husband, George Wines, couldn't afford housing. For six months they had to live out of their van, hanging sheets on the windows for privacy and stopping at gas stations to wash up. 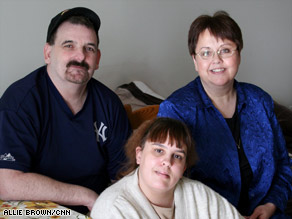 Suezette Steinhardt, right, helped George and Carolina Wines move from their van to an apartment.

A medical disability kept George Wines from working, leaving it to his wife to support both of them.

It was a battle, and they were losing.

"When it would be really cold, in the 20s, I'd be up most of the night keeping the van running," said George Wines.

But with help from Suezette Steinhardt, families such as the Wineses are getting back on track and into their own homes. The couple now have an apartment, and Carolina Wines said she is moving forward with her education and her career.

"Without Suezette," said Carolina Wines, "we would probably be dead."

Using her Virginia home as headquarters, Steinhardt, a suburban mom, created Family Preservation and Strengthening Services, or Family PASS, to help provide affordable housing and support services to low-income families. She aims to keep families in her community out of shelters and on a path to self-sufficiency. Do you know someone who should be a CNN Hero? Nominations are open at CNN.com/Heroes

"When we have an economy like this, the people at the very bottom are really going to be hit," said Steinhardt. "As a mother, as a neighbor to these families, I have to be a part of the solution of what's going on in our community."

Watch the Wineses describe life in their van before meeting Steinhardt »

For Steinhardt, 52, the key is bridging the gap between the time families exit transitional housing programs and they obtain affordable, permanent housing.

Most of the clients in Steinhardt's program are single mothers struggling to make ends meet.

"My mom was a single mom. She had four children. She started at minimum wage," she said. "I understand how hard it is for someone to raise a family in those circumstances."

Steinhardt's mission began in 2004 after witnessing a single mother go through an ordeal trying to make it on her own.

The woman, who had a full-time job, stable child care and transportation, had been living in the transitional housing facility where Steinhardt worked. But when the woman's time at the shelter was up, Steinhardt says her salary did not qualify her to rent an apartment.

"I kept thinking, 'Why? She has a good job. The rent's not that high. What's going on?' Steinhardt recalled. "I did her budget [and] realized that at a low rent, working full time ... if she just paid her bills, not buying food, not buying clothing, she was already [in] a $300 to $400 deficit each month."

Steinhardt and her husband decided to step in and use their own money to help the woman and her family.

"We worked with the landlord, got the lease, and then we subsidized the rest," she said. "And that's how we got started."

The approach worked so well that Steinhardt sent an e-mail to a few dozen friends: "If you think this is a good thing, forward it to a few people," it said.

The response stunned her. Donations poured in from people she didn't even know, she said, including a check for $7,000.

That motivated Steinhardt to work harder, and Family PASS took off. Clients are referred by local churches, social service agencies or the Department of Family Services.

In addition to placing families in housing and subsidizing rents, the program provides education and employment opportunities.

Steinhardt also turned the basement of her home into a child care center, allowing parents in her program to go back to school at night.

"We just put the support under them so they can realize what they can do," she said. "Whatever they need to move forward, we're going to find some way to do it."

Watch Steinhardt describe how she's helping families out of homelessness »

Family PASS has helped 15 families out of homelessness and continues to provide them with support. For Steinhardt, the days may be long, but seeing families begin to flourish makes it all worth it.

"I've had one mom ... [who is] dead tired, picking her kids up at 10:30 at night. And they're all asleep and she'll start telling me something about a program that she loves. I know she needs to go to bed. I know I need to go to bed. But I love it. I love that excitement."

Want to get involved? Check out Family PASS and see how to help.

All About Homelessness • National Economy