(CNN) -- Amanda Mezyk had developed a close bond with her employers' children as their live-in nanny, which is why it was so painful when her bosses told her she was being laid off. 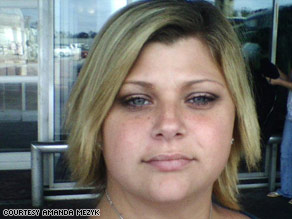 Amanda Mezyk, 20, lost her live-in nanny job when the recession forced her employers to cut the family budget.

"I started crying and they kept repeating, 'I'm sorry, I'm sorry,'" Mezyk, 20, said about the day last November when her employers -- a Miami, Florida, plastic surgeon and a part-time dermatologist -- delivered the bad news.

"They sat me down in the living room -- where we usually would sit and talk about the kids -- and they told me that business was slow and they had to cut expenses."

As Mezyk began to realize that life as a virtual member of her employers' family was ending, she thought about the little girl and boy -- Delaney, 6, and Landon, 4 -- with whom she had grown so close during the past 2½ years.

Later, Landon found Mezyk crying in her bedroom and asked her what was wrong. "I told him I had to go away for a little while, and that I would come visit," she said.

"I was sad because I had to let the kids go," she said. "I love them like they were mine. And I want to be a part of their lives for the long run."

Her job as a live-in nanny at a lavish home in an upper-class, upscale private community came with many perks that suddenly had disappeared. The insured car provided by her employers for personal and professional use was gone. Without a steady income, Mezyk wondered how she would pay her mounting $8,000 credit card debt.

There would be no more accompanying the family on all-expenses-paid vacations to the Bahamas, Italy and China. The layoff also put an end to Mezyk's annual paid weeklong vacations.

To survive, Mezyk has moved in with a great-aunt and uncle until she can decide on her next move. iReport.com: Tell us what are you doing to survive bad economy?

Industry leaders said Mezyk is just one of thousands of nannies who've been swallowed up by the shifting landscape in the U.S. child care industry, one that is affecting not just nannies, but baby sitters and day care centers as well.

The economic booms during the late 1990s and from 2004 to 2007 made it possible for more middle-class and upper middle-class American families to employ nannies, said Genevieve Thiers, founder of Sittercity.com.

"Business is down a good 45 percent," said Jennifer Winter, 37, owner of Nannies in Miami, a nanny placement agency. "The wealthy are still hanging on to their nannies, but the economy is forcing middle-class parents to make cuts."

Annie Davis, who launched Annie's Nannies Household Staffing in Seattle, Washington, in 1984, described the current recession as "the weirdest time I think I've seen in my lifetime." She's seen about 10 percent of her active nanny roster laid off since last October.

"There are nannies being laid off in families where both parents work and one parent has lost their job," said Candi Wingate of nannies4hire.com and babysitters4hire.com.

Baby-sitting 'a godsend' in recession

The recession also is forcing more non-working parents in single-income families to take jobs outside the home.

As a result, many formerly full-time nannies are taking what they can get -- which often are part-time child care positions, said Wingate.

Katie Heath, 30, a self-employed health consultant and part-time baby sitter listed with Sitters to the Rescue in Indianapolis, Indiana, has been taking advantage of the increased demand to augment her income.

"I'm baby-sitting more than I'm working my regular job," Heath said, adding that she's caring for children between 12 to 16 hours a week, while devoting five hours weekly to her business. "Baby-sitting is a godsend for me."

During a recession, said Thiers -- a self-described 30-year-old "super-sitter" -- "everybody suddenly realizes, 'Wow, caregiving is a really great gig.' "

"Increased numbers of recent college graduates are posting resumes on the Web site for jobs as nannies or baby sitters, because they're not finding full-time work in other fields," Thiers said.

Not surprisingly, with a rising supply of available baby sitters, the pay rate is falling. The standard baby-sitting rate nationwide is $10 to $12 per hour, according to most agencies. This can drop by at least a dollar per hour in some markets, due to economic pressures. According to its survey, 26 percent of Sittercity.com's sitters and nannies said their pay has decreased from last summer.

For full-time nannies, a typical Miami salary in past years was $700 per week, said Winter. "Now they're getting more like $400."

In the two months since her layoff, Mezyk has been accepting baby-sitting jobs to survive -- working sporadically about 20 hours a week for various clients. "It's nowhere near what I'm used to making," said Mezyk. "Baby-sitting is not the same thing as being a nanny. It's not promised, it's not guaranteed. My goal is to have a steady income."

Many parents who have laid off their child care helpers find themselves wracked with guilt because they're getting rid of nannies they love, said Thiers. "They're trying to move heaven and earth to get them a new position," she said, including using online chat rooms and message boards.

Agencies are touting the benefits of what's called nanny sharing, when two families share the talents of a single nanny. Nannies4hire.com, which boasts of helping more than 500,000 U.S. and Canadian families since 1987, said the addition of nanny sharing has boosted business by 15 percent.

Nanny sharing has its drawbacks, including logistical problems, said Winter. "What happens if the nanny gets sick? Different parents have different demands and both families suffer," she said. "Nannies think it's too stressful and a lot of them won't do it."

Wingate agrees that nanny sharing can be complicated and said for this reason, good communication between the nanny and both families is critical.

Faced with few employment options, Mezyk said she would consider a nanny-sharing situation, despite the idea of having more bosses.

Her personal crisis has brought Mezyk's young career to a crossroads, as she considers pursuing a degree in pediatric nursing. Meanwhile, she still keeps in touch with her former employers and with little Landon and Delaney.

"I know the kids really enjoy me," she said. "When the nanny leaves, it's really the kids that get hurt the most."

All About National Economy • Daycare • Seattle