Special Olympics takes on use of 'R-word'

(CNN) -- An unexpected and sudden spotlight on the Special Olympics, an organization that for more than 40 years has served and honored those with intellectual disabilities, comes less than two weeks before the nonprofit launches a new campaign: Spread the Word to the End the Word. 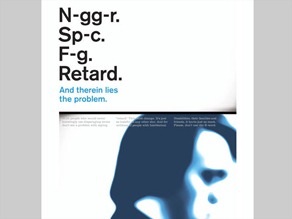 Special Olympics is running a campaign to stop the use of the "R-word."

March 31 is being billed a "national day of awareness," a call to Americans to recognize and rethink their use of the word "retard," or as the organization would prefer, the "R-word."

"Most people don't think of this word as hate speech, but that's exactly what it feels like to millions of people with intellectual disabilities, their families and friends," a statement about the campaign reads. "This word is just as cruel and offensive as any other slur."

The push for increased respect is being spearheaded by young people who are collecting pledges or vows to not use the word at http://www.r-word.org/, and are leading online discussions on how people can get involved in this cause.

So far, across the country, 300 schools have already committed to hosting rallies on March 31, Special Olympics President and CEO J. Brady Lum said.

The ads designed by BBDO New York, will challenge the public -- with language meant to raise eyebrows -- to think about the issue more deeply. The campaign uses slurs against Asians, homosexuals, Jews and African-Americans to make the point that language can be harmful to all groups, including people with intellectual disabilities.

Attention on the Special Olympics skyrocketed Thursday when, in a quick and clearly unscripted moment, President Obama exhibited the power of words during his history-making visit with Jay Leno.

While joking on The Tonight Show about his bowling prowess (during last year's campaign trail he shamefully scored 37 in a game), Obama said he'd been practicing at the White House.

He told Leno that he bowled 129 in the White House bowling alley and said his bowling skills are "like Special Olympics or something."

The comment during the taping of the show prompted Obama to pick up the phone on Air Force One and call Special Olympics Chairman Timothy Shriver to preemptively apologize for the remark before it hit television screens. He also reportedly invited Special Olympic athletes to Pennsylvania Avenue to hit the lanes and give him tips or shoot some hoops.

The president "expressed his heartfelt and sincere commitment to work with our athletes and make this country a more accepting place for people with special needs," Lum, the organization's president, said.

What Obama said on The Tonight Show adds to the discussion that's needed to raise awareness and has proven "an incredibly important and seriously teachable moment," Lum said.

From playgrounds to the "top rungs of our leadership, including our president," he said Americans have plenty to talk about and learn when it comes to stereotypes and how words can sting.