In a recession, cheap is chic

(CNN) -- Jeneba Jalloh Ghatt is the first to admit that she likes nice things. 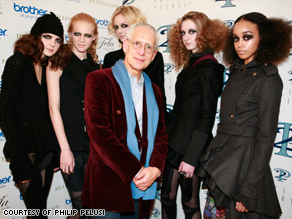 Stylist Philip Pelusi has offered his clients bargains and hosted two designers' shows to help them save money.

But these days when she passes the new upscale shopping area en route to her Chevy Chase, Maryland, office, she refuses to even glance at the lavish goodies.

"There's a Ralph Lauren store, a Louis Vuitton store, Tiffany's," said the attorney and principal of The Ghatt Law Group. "I drive by and I don't even look in that direction."

With the economy in shambles and so many people losing their jobs and homes, it is no longer considered cool to brag about possessions and purchases.

For many during a deepening recession, conspicuous consumption is out and frugality is the new black.

"People have long used the way they shop and what they buy as a way to communicate with other people about their values, their tastes and their interests," said Kit Yarrow, a consumer psychologist and professor at Golden Gate University in San Francisco, California.

"A year ago, what was considered the ultimate status symbol would have been the chicest bag or the most luxurious outfit," Yarrow added. "Now what's chic is being the most knowledgeable and efficient at saving money."

Yarrow said that despite the tough economic times, there are many Americans who still have disposable income.

Those people are choosing not to spend, she said, or making more thoughtful purchases.

"What I am saying is that we have moved from an era of conspicuous consumption to an era of considered consumption," Yarrow said. "People at one time wanted to showcase all of the things they are buying and now they are stopping and really thinking about it."

Brett Wright, co-founder and chief creative officer of Uptown Magazine, is also seeing evidence of that attitude shift. iReport.com: What adjustments are you making to your budget?

His publication is targeted at what he terms the "triple A's" -- affluent African-Americans and those who want to be.

Wright said he is seeing consumption of big ticket items being put on hold or done more discreetly.

"Buying the new red Ferrari is certainly not in favor," Wright said. "Everybody is trying to do things sort of under the radar screen. No one is looking to be as ostentatious as they may have been in the past."

Consumers are looking for value for their spending, Wright said, and focusing on "How do you live like a king without having to spend a king's ransom?"

To that end, Wright and his staff are brainstorming ways to address the change in spending habits in their publication.

Renowned hairstylist and salon owner Philip Pelusi said he, too, has seen the focus shift to more bang for the buck during the economic downturn.

Pelusi said clients are opting for money-saving tactics like extending time between visits, partial highlights or getting services on "training nights" for the salon, which can trim their bill up to 60 percent.

"We are doing everything we can to accommodate the clients," said Pelusi, whose Tela Design Studio in Manhattan has only seen a slight decrease in business.

Pelusi is also reaching out to others in the industry who are looking to economize.

Marilani Huling is a Washington-based jewelry designer who said she has reduced prices on her creations to cater to her clientele.

Huling said that during the recent "Crystal Couture" event in Virginia, one of the most popular presenters during the two-week fashion festival was Goodwill Industries.

"Goodwill had stylists put together things off their racks and put them on the runway models," Huling said. "I was surprised, because everything really looked good."

"People had their collection of 'Mys,' " Howard said. "My massage therapist, my yard person, my hairdresser. Now people are really stepping back from that and saying 'If I cut my own lawn, I'm going to have that $60 in my pocket.' "

Howard said he has noticed from listeners to his popular call-in radio show that even those who really don't need to cut back are still choosing to do so. That didn't happen, he said, during the last deep recession from 1979 to 1982.

Howard said he attributes the rush to downsize in part to the 24-hour news cycle, which continues to pepper the public with bad news.

"People didn't have access to the constant drumbeat of news that they have now," he said.

With so much personal spending being tied to emotion, Howard said consumers are being much more cautious while they ride out the economic turmoil and are taking comfort in being able to score good deals.

Ghatt posted unabashedly on Twitter when she spotted a pair of Cole Hahn shoes originally priced at $180 going for $20 at Marshalls.

When a friend expressed his surprise that she would go public with shopping at a discount store, she had a quick comeback.

"I tweeted and said 'Don't you know that bargain divas are in style now?' " Ghatt said, laughing.

All About National Economy • Job Losses