(CNN) -- When Rita Bryer sees 300-foot-tall wind turbines sprouting up from the prairie near her home in western Oklahoma, she can't help but wonder about the view from the top, where blades the size of semi-trucks spin. 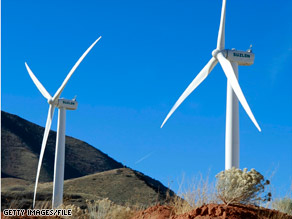 Schools are adding courses to prepare wind turbine mechanics and other green workers.

"Out here, you can see the wind turbines from 10 miles away," she said. "Think about how far you'll be able to see when you're at the top."

So, partly out of curiosity, partly because she wants to be part of something new, the 51-year-old is leaving behind a career of odd jobs and oil-field work.

She's going back to school to become a wind turbine mechanic -- one who'll have to scale the turbines to make repairs.

Across the country, people like Bryer are looking to the renewable energy sector in hopes its "green-collar jobs" will offer them stability in this shaky economy. Some are signing up for community college or apprenticeship programs that train students to be wind turbine mechanics, solar panel installers, fuel-cell engineers or energy efficiency experts.

Watch how the green economy is growing in Pennsylvania »

Government support has rallied excitement for the prospect of a green jobs corps, as President Obama's stimulus package puts about $20 billion into greening the economy, according to the White House.

In his recent speech to Congress, Obama said the U.S. will double its supply of renewable energy in three years. To do so, he's calling on a new class of workers to be trained in environmental fields. Green jobs training programs will get $500 million from the stimulus.

At a summit in Philadelphia on Friday, Vice President Joe Biden said people who make $20 per hour before a green jobs training program can make $50 per hour after. On average, the clean-energy jobs pay 10 to 20 percent more than similar work outside the field, he said.

Watch how to land green jobs »

Adding to the enthusiasm, Biden cited a recent case in Chicago where a maker of energy-efficient windows intends to gradually rehire 250 workers who were laid off when their window company closed late last year.

There is a "very direct" correlation between the stimulus package and Serious Materials' ability to reopen the plant, said Sandra Vaughan, chief marketing officer for the California-based company.

But not all signs for green industries are so positive.

Wind and solar companies have cut staff and stalled new projects as the credit crisis has tied up money, meaning banks are less able to invest in renewable energy.

In the short term, that will make things difficult for the newly trained green work force, said Kathy Werle, dean of applied sciences and technology at San Jose City College, in California, which offers associate degrees in solar panel installation.

"Right now, money is so tight. People can't borrow money to put solar on their homes," she said.

Werle said she expects Obama's stimulus plan to help jump-start the industry. Within a year or so she expects the graduates to be able to find plenty of green jobs.

The uncertainty appears not to be tempering student demand for green education, though. Earlier this semester, 260 people showed up for 44 seats in solar panel installation classes at San Jose City College, Werle said.

"Anything green is very popular," she said.

Meanwhile, some schools that train the green-collar work force are billing their programs as near-guaranteed ways to find stable jobs.

Sidney Bolfing, chairman of the Texas Renewable Energy Education Consortium, an association of community colleges, said nearly 100 percent of his graduates find jobs in the fuel-cell industry -- many before graduation.

"Typically all of these students all get jobs," he said.

Bolfing is so confident in the idea that he markets green-collar careers to high schools and elementary schools in the area.

He hopes that the standard list of childhood dream jobs -- astronaut, firefighter, police officer -- soon will include things like wind technician and fuel-cell engineer.

Even if there's trouble in the short term, green jobs are needed to fight climate change and spur economic growth, he said.

"We need to develop these new technologies like there's no tomorrow," he said.

Matt Raines, 31, of West, Texas, had a career as an auto mechanic. But that didn't seem to be going anywhere, so now he is enrolled as a community college's hydrogen fuel program.

He said local people look at him funny when he tells them about the decision because they don't understand what he'll be doing.

"I had one lady who actually asked me if I was building hydrogen bombs. I was like, 'No ma'am, it's energy production, green energy,'" he said.

Raines finds the program exciting, and says he's been contacted about jobs by three companies, even though he is yet to finish his two-year degree.

She applauded money in the stimulus package that will go to green job training programs, but said "training is going to be a real challenge" in the coming months.

Her company has a hiring freeze in place at the moment because of the economic downturn, but expects to grow in 2009, she said.

Some green jobs are low-tech and require little or no specialized training.

Some weatherization steps are as simple as shoving newspaper insulation in a home's attic, caulking windows and repairing ductwork.

More than $11 billion of the economic stimulus package is intended to help people make their homes more energy efficient, according to the U.S. Department of Energy.

Because of those efficiency provisions, Logston said he expects his business to quadruple.

He employs six people now and expects to hire at least 12 more, he said. He also plans to offer his employees insurance for the first time.

"Everything's budding, so to speak, everything's in bloom even though it's winter," he said of green jobs in the home weatherization business. "The energy costs are so high people can't afford" not to increase efficiency.

Part of the trouble with estimating the profitability of green jobs is that no one seems to be able to agree on a definition for the term. The U.S. Bureau of Labor Statistics does not separate data on green jobs or jobs in renewable energy, and economists disagree on how many new green jobs the stimulus package will create.

In such a murky situation, community colleges often network with the local business community to gauge their interest in students from green-jobs programs. Many have banded together to dig up regional knowledge.

"The students always ask, 'Can you guarantee job placement?' No, I can't guarantee it, but I can tell you I've spoken with local wind farm managers and everybody I've spoken with says there is a need, (and) there will be a need," said Kimberlee Smithton, director of business and industry services at the High Plains Technology Center in Woodward, Oklahoma.

That school, where Bryer is taking classes, is offering a wind turbine technician program for the first time this year.

Bryer said she doesn't know how much money she'll make in the wind business. She doesn't much care.

"To me, especially, it's going to be a job -- a good job I think I'll like, and I just look forward to doing it," she said. "It's always nice doing something different, not the same old thing."

The woman who's always been seen as a rebel because she was the lone female working tough jobs in the oil fields now feels like she's part of a movement for change.