Fiance kidney donor: 'Of course we were a match'

(CNN) -- From songs to poems to sayings on the side of coffee cups, everyone tries to define love in words. 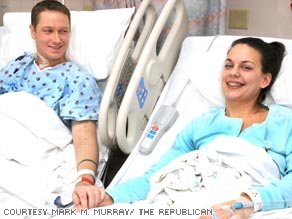 Liz Kelly donated her kidney to her fiance after he was diagnosed with congestive heart failure.

But often, it's the extraordinary actions we take in the name of love that really define it.

Liz Kelly's fiance, Matt House, needed a kidney after he was diagnosed with congestive heart failure.

In order to get him to the top of the donor list, Kelly signed up to donate hers. At first, she never dreamed she would actually be a match, but it turned out she was.

The Springfield, Massachusetts, couple (he's 31, she's 29) spoke with CNN's Nicole Lapin about whether Kelly thought fate played a hand in finding him a donor match.

The following is an edited transcript of the interview:

Nicole Lapin: Liz, I didn't know about the donor process, until we started talking to you guys. The donor process works whereby a friend or a family member can donate a kidney to get Matt higher on the list, so you decided that you were going to do that. Why did you decide to do that?

Liz Kelly: It was pretty much a no-brainer, I think. His sister was actually going to donate at first. But she didn't work out for health reasons. It's obviously better to have, you know, a family member donate a kidney, too.

But since that wasn't going to work out, his stepfather stepped in because they were the same blood type. And that ended up not working out either.

He had some heart issues and some other health issues. So, I said, you know what, I'll just donate to the list. And that's what I was intending on doing. And then I found out that we were actually a match, and it was amazing.

Lapin: It was amazing, I'm sure, to get that phone call, because you did it just so that you could get higher on the list. A lot of people on our Web site are fascinated by your story, guys. [A viewer] has a question for you right now, Liz: Have you ever had any surgeries before this one? If not, how did your prepare yourself for this?

Kelly: No. This was my first surgery, so that definitely made me very nervous. That was the definitely scariest part for me, just not knowing what to expect. But, Matt has been through several surgeries before. So I know I had him in my corner. And I looked up a lot online. I found out a lot of great information online. So that's definitely how I prepared.

Lapin: And [another viewer] has a question in for Matt, actually: Were you scared that perhaps your body might reject Liz's kidney or were you always confident that the surgery would be a success?

Matt House: I think I was pretty confident with her being the same blood type or us matching is pretty phenomenal, so I didn't expect it to reject it anyway. Maybe after the surgery if I would have a little pain down there or something like that, I would get a little nervous and think that it was going to reject, that there's something wrong.

But that would just pass. It was me just being a little overanxious, I guess, but not really, no. I was pretty confident everything would go well overall. We're both pretty healthy for the most part. And being the same blood type was just you know really great, so it worked out good. So, I wasn't really worried at all.

Lapin: Fate, some may say?

Lapin: Yours is a lot bigger. You're a little girl, but you happen to have a kidney that is perfect for Matt. Do you think it was meant to be?

Kelly: I do. I definitely do. People tell me that all the time. When they told us that we were a match, I was very surprised at first, but then I thought about it a little more. Of course we were a match. How could we not be a match?