BOCA RATON, Florida (CNN) -- Edgar and Nina Otto say they had no idea how their four-legged clone would react to them. But last week, after waiting several months, the yellow Labrador puppy bounded off an airplane at Miami International Airport, right into their arms. Lancelot Encore is his name, or Lancy for short. 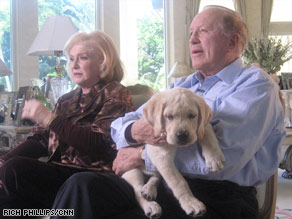 Nina and Edgar Otto say their cloned puppy crosses his paws like the original dog did.

The puppy Lancy looks and acts just like Lancelot, their first Lab, who died a year ago, say the Ottos. That's not surprising, because Lancy is Lancelot's clone.

"We just got him because we wanted to have Lancelot more than just the 11½ years," Nina Otto said.

The Ottos submitted the winning bid of $155,000 at an auction with a San Francisco biotech company that had Lancelot cloned in South Korea.

Watch Lancy at home with the Ottos »

Edgar Otto is the son of Edward Otto, a co-founder of NASCAR. So money was really not an issue for this family.

They got the idea five years ago and had a sample of Lancelot's DNA extracted and banked when they heard that cloning was possible.

See the cloned dog for yourself.
Monday, beginning at 6 a.m. ET

So far, the Ottos say Lancy is eerily similar to Lancelot. They say Lancy walks just like Lancelot and crosses his paws like him, too.

"I only was hoping to get the essence of Lancelot back," Nina said. "I know I've gotten that. Anything else is icing on the cake."

But is it the same dog?

The Ottos have nine other dogs, as well as cats, birds and sheep, all living on a spectacular 12-acre spread in Boca Raton, Florida.

"This dog was immediately accepted by the nine dogs," Edgar Otto said. "There was no baring of teeth, not ever a single growl. So, the pack accepted him."

Four customers who also placed winning bids in an auction by BioArts International will have their dogs cloned, and those pets will be delivered in the coming months.

BioArts is collaborating with South Korea's Sooam Biotech Research Foundation to produce the dog clones. Cloning dogs is considered difficult because of their complicated reproductive physiology, but the procedure has been perfected in South Korea, according to industry experts.

In Lancy's case, his DNA was placed inside an egg from a South Korean dog and implanted in an Irish setter in South Korea. About two months later, 1.3-pound Lancy was born in a single litter birth.

BioArts says it's an expensive process and the company is still analyzing whether pet cloning can be a viable, profitable business.

"I would love to see more families be able to have this experience," said Lou Hawthorne, the BioArts CEO.

"But due to the complexity and cost of the process, availability is going to be limited for the foreseeable future," he said.

Lancy is a robust 17-pounder today, and quite healthy according to the Ottos. He romps around their yard like any puppy would. But, the Ottos say, he's taken a particular fondness to a bush planted at the spot where his original, Lancelot, died last year.

"This is the only guy that's gone to that bush, and he started burrowing in the bush," Edgar Otto said.

"I don't know what to make of that, but we have nine dogs and let them play everyday out here, and this guy just hung out there," he said.

But this story is not without its critics. The Ottos can do whatever they want with their money, but "a shelter dog just lost out on a great chance of having a home," said Cherie Wachter of the Humane Society of Broward County, Florida.

Each year, the Humane Society euthanizes 3 million to 4 million pets in the United States.

"I think, until the day comes when animal shelters across this country have empty cages all the time ... maybe then think about cloning," Wachter said.

But the Ottos have a whole zoo full of pets and have donated more than $300,000 to their local Humane Society.

"The only reason I don't go to the Humane Society is because I would bring every one of them home," Nina Otto said.

But this process appears to open up a whole new horizon for pet lovers with money in the bank. Edgar Otto says he's a futurist.

"Think about this," he said philosophically. "You could have your favorite dog with you your entire life. I don't think that's too far-fetched."

All About Cloning • Pets