He brings joy of music to deaf people

Friedrich Nietzsche said, "Without music, life would be a mistake." Music is a big part of many people's lives. For some, music is life. 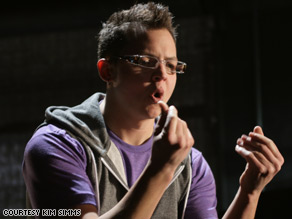 But not everyone can have music in their lives, and one man is trying to change that for the deaf community.

Forbes spoke with CNN's Nicole Lapin about how D-PAN works. The following is an edited transcript of the interview.

Forbes: Really, the story here of how the whole thing came up was, I was in a car with three girls, and I went to school at Rochester Institute of Technology in New York. So we took a road trip to Gallaudet University, and on this trip I was singing all of these songs to my friends. And it's just something I've been doing for a while.

So I'm signing all of these songs and all the sudden, a light bulb goes on above my head, when I'm like, wouldn't it be cool if there were music videos with deaf performers in them, signing the song, signing the lyrics of the song.

That was really where the idea started from, and I instantly went back to RIT, and I had a friend make me a video of me signing an Eminem song and that's how the whole thing really started.

Lapin: Eminem, Christina Aguilera. You started translating really popular music videos, and tell me about these shoots, because this is a really big production you put on.

Forbes: Yeah. I mean, we had hearing and deaf people behind the scenes creating this. We had interpreters; there were probably about 20 people on the production set for these videos.

Forbes: For me it was just awesome to see all of these deaf people who have never been involved with music be involved in these videos for the first time.

A lot of the people who are in the videos never experienced music before. So for them, it was just an awesome experience, and they were really thrilled to be a part of it.

Lapin: And a lot of people on our Web site, CNN.com, are thrilled to be part of your experience, being introduced to your story.

A lot of questions also came in; I want to bring some to your attention. Ashley has this question for you Sean. "Has anyone ever told you that D-PAN would not be successful and if so, how did you respond?" I'm sure you had some haters out there.

Forbes: I've had, you know, I've approached a few situations before where they didn't only tell me that D-PAN wouldn't be successful, but they told me that I would never be successful as a deaf musician.

And I always laughed it off, because I knew deep inside of me, this is what I wanted. And I wouldn't let anyone tell me no, I wouldn't take no for an answer. So those people who told me no, look at me now.

All About Gallaudet University • Eminem • Hearing Loss and Deafness