Former model: Fret over being fit, not how you look

(CNN) -- Celebrities and their bodies. We're obsessed. They're obsessed. And it spills over to how many people feel about themselves. But how much concern over weight gain is about vanity and how much is about critical health issues? 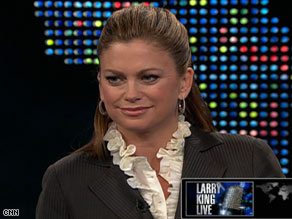 Kathy Ireland says she's more concerned about what weight gain does to her health than her appearance.

Ireland is a former supermodel and actress and has had her own weight issues. Greene is Oprah Winfrey's personal trainer.

The interview picks up here after King plays a clip from Alley's appearance on the show last week. In the clip, Alley says her weight gain was "humiliating. I think the biggest, most painful thing for me is I have all these people I inspired and then I let them down."

Larry King: Are we overly involved with this topic, Kathy?

Kathy Ireland: Well, I think we are for the wrong reasons. And I think there is such an obsession with appearance. With my weight gain, people wanted to know, well, when is she going to squeeze back into a bikini? No. That is not what it's about. But what people weren't asking me, what's the triglyceride level? What is the C reactive protein?

Larry, with your foundation and what you are doing to make heart health at the forefront of everyone's mind, and Bob with your information about healthy living, it is so important. Heart disease is the number one killer of women in America.

Bob Greene: No, we're not. We run into problems any time we think weight is the problem. Weight is a symptom of something that needs to change in your life.

King: Kathy, you [were an] internationally famous swimsuit model, and then you gained weight, right?

Ireland: The weight gain was gradual, about a pound a year for the past 25 years. I intentionally built a business that has absolutely nothing to do with my appearance.

So I would think what does it matter? My food choices. Well, what matters is what am I doing to my health? And I encourage people -- you know, please don't put it off. Every mom I know has a to-do list. Put yourself on that to-do list. Call your doctor tomorrow. Get an appointment. Find out what is the health of your heart.

Greene: Well, there's two sides to that story. First off, if you remain heavy, that's when the most damage is done to your heart and the excessive health ramifications from keeping overweight. So as long as you're watching, even if it's yo-yo dieting, that's healthier than the person that remains heavy.

However, the best thing is to live the lifestyle of moving more and eating less and pursuing what it is that got you there in the first place.

King: By the way, Bob's posted an exclusive commentary for our blog. Read Bob Greene's blog on CNN.

Let's take another look at a clip of Kirstie Alley talking with Oprah about her weight struggles.

[video clip begins] Alley: And then when I gained weight the last time and lost it, I honest to God thought, this is it. This will be the last time I ever do this again.

Alley: And I moved it out and made it a dining room. [video clip ends]

King: That's Kirstie sort of making fun of this, don't you think?

Ireland: I appreciate her honesty and her openness.

And Oprah, she has let us know that there's no shame in a weight gain. With the picture that our son took of me, I was tempted to push the delete button. But, you know, beautiful people come in all shapes and sizes, ages and colors. But we've got to get the message out about health. What kind of message is that sending to our children?

King: Kathy, are we getting better?

King: Do you notice more interest?

King: This is not purely American, is it? Or is it?

Greene: No, it's starting to shift over into Australia, New Zealand, overseas. So it's not uniquely American.