Papa John's founder warns against eating too much pizza

LONDON, England (CNN) -- The founder of one of America's largest pizza chains has offered unexpected advice to his customers to limit themselves to only one or two slices. 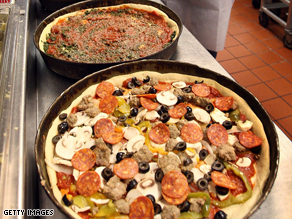 Pizza is not normally known for its health benefits; thick, cheesy toppings push up the calorie count.

During an interview on BBC's Radio Four program in the United Kingdom, John Schnatter, said, "you can't eat five or six slices."

He was responding to a question from presenter Adam Shaw about whether he was concerned about the impact of the British government's anti-obesity drive on pizza sales.

"No. Pizza's actually healthy for you if you don't eat too much of it," Schnatter replied, adding, "You can't eat five or six slices but if you eat one or two slices it's very nutritious."

The pizza chain boss had just finished telling BBC listeners that the UK market was a "huge priority for Papa John's International."

The company has 118 outlets in the United Kingdom, its second biggest market outside the U.S. after China.

Sales in the UK jumped 60% on Monday alone after heavy snowfalls were estimated to have encouraged around one in five workers to stay at home.

Schnatter is in the United Kingdom for the annual franchisee conference, a marketing tool to encourage more small business owners to buy into the Papa John's brand.

While it's impossible to know whether his comments have dissuaded anyone from investing in the company, BBC presenter Shaw suggested shareholders might take issue with his suggestion.

"I'm not sure your investors would want to hear you tell people don't eat too much of our pizzas," he laughed before thanking Schnatter for his time.

Schnatter opened his first shop in 1985, after selling his beloved Camaro to buy his first pizza oven. There are now more than 3000 restaurants worldwide.