Gram-negative bacteria are drug-resistant superbugs to watch out for 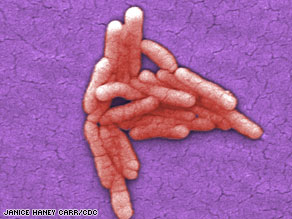 A new crop of drug-resistant superbugs is in our midst, and experts believe that they could rival the deadly superbug MRSA.

A new report from the Infectious Diseases Society of America says these superbugs are creeping onto the radar in hospitals across the country, and our ability to fight them is next to none.

Are these new superbugs poised to be the next MRSA?

Dr. Sanjay Gupta, CNN Chief Medical News Correspondent: They just may be, according to that new report by the Infectious Diseases Society of America, but we can't say that just yet. MRSA is still a much bigger problem.

First, let's define what these superbugs are. They're called "gram-negative" bacteria. They are extremely drug-resistant; they have long, complicated names like "acinetobacter baumanii" and "klebsiella pneumoniae." Two important issues related to these bacteria: They are increasingly cropping up in hospitals, and they are nearly impossible to treat. Dr. Gupta's Blog: Here's why you should be scared of superbugs

Is this related to the Brazilian model who recently died from a bacterial infection?

Gupta: Yes. A gram-negative bacterial infection killed Brazilian model Mariana Bridi da Costa last month. She had her hands and feet amputated and kidneys removed to try to stem the infection's spread before she died. Gram-negative bacteria are also responsible for a spate of infections among returning Iraq war vets.

We've talked a lot about MRSA -- methicillin-resistant Staphlyococcus aureus -- and the core issue there is that very few antibiotics can treat it. The biggest concern with gram-negative bacteria is, there are virtually no drugs to effectively treat them. One drug, Colistin, is the only option that sometimes works, but it is incredibly toxic -- can cause kidney damage.

So how do these infections spread?

Gupta: Gram-negative infections are spread almost exclusively in hospitals, whereas MRSA has escaped the hospital confines and can now be found in the community. But keep in mind that MRSA started in hospitals.

Doctors see gram-negative infections among patients who are already very ill. Might be babies in the NICU, very old patients, patients who've just had surgery, burn patients in the ICU, for example. Gram-negative bacteria can enter the body by way of catheters, IVs, ventilators or wounds.

How common are gram-negative infections?

Gupta: The exact number of gram-negative-related infections or deaths is hard to pin down, because these infections are not reported routinely to the CDC. But doctors we spoke with say that the numbers could one day rival MRSA numbers, and that's really raising eyebrows among infectious-disease experts.

If there are virtually no drugs to treat gram-negative bacteria, then what are the options to stem the spread of these infections?

Gupta: Hospitals have to practice infection control: handwashing between patients; patient families also washing hands. Sometimes isolating patients in a different room if they are found to have an infection. Like with MRSA, not overprescribing antibiotics; that's how these bacteria learn how to adapt and become less treatable. And finally, more research into treatment.

CNN: Give us an overview.

Dr. Helene Boucher: The big reason that we wrote report at this time is to make a point and try to get some interest in a big problem that we're facing: infections due to gram-negative organisms. MRSA, which most everyone knows about now, is gram-positive. We know about MRSA, but there has been an increase in infections caused by gram-negative bacteria, and they are resistant to many, or sometimes all, drugs. Another point: There has been a decrease in investment in antibiotics to treat these infections, for which we have limited or no treatment options. There is no antibiotic drug in Phase II or beyond, in patients.

CNN: Where is this cropping up? Mostly in hospitals?

Boucher: We see these infections a lot in hospital settings. Acinetobacter is seen in servicemen, Iraq war vets. Vets often have wound infections. There is difficulty with treating them, deformities that they leave. Some people at risk: ICU patients; very young or old patients; people with a lot of other health problems who are already immunocompromised. Some patients who have had a transplant, a burn or some other thing happen to them. We also worry about infection control problems. We saw this in Brooklyn. A lot of infections spread.

CNN: How does this spread in hospitals? Same way as with MRSA?

Boucher: All infections are thus far in hospitals. Most commonly, it spreads from not washing hands when going between patients. We really emphasize hand hygiene. Sometimes doctors call for private rooms for patients who are infected.

CNN: Do you fear that this will become another MRSA? Or worse?

Boucher: It has borne out in Brooklyn, infection gone from rehab centers to nursing homes to hospitals. Patients move around faster: They go to rehab, go home, go to the dialysis center, etc. That's a lot to worry about, where these bugs tend to be moving. The concern is, this could be as bad as, if not worse than, MRSA. At least with MRSA, we have some drugs to treat it.

CNN: What would it take for this to become more like MRSA, to spread into the community?

Boucher: That's a hard question. It takes a bug being strong enough over time. It takes some change that makes it more transmissible. It takes a breakdown in infection control: not washing hands, not paying attention, etc. This bug gets a little "better" over time. With MRSA, it took football players who took whirlpools in same tub, sharing the same towels. Men having sex with men. If you put people factors and bug factors together, then you see the spread. It depends on how "fit" the bug is, how able it is to grow and replicate when gets resistant to antibiotics.

A lot of people are trying to understand this. Some people -- John Bartlett at Johns Hopkins is one scientist -- have predicted a linear increase over time in these infections. We can predict that in several years, we will get a lot worse off. We can't predict whether or when it would end up being something we see in healthy adults, kids, etc.

One thing we have seen is a number of urinary tract infections in women caused by one of these bad bugs; the key is that the women have never been in the hospital, not gotten antibiotics.

CNN: Why haven't we heard about this much until now?

Boucher: Depends on whom you ask: We infectious disease experts have been talking about it. War victims have gotten some press, but this is not a sexy story. The is not always a community interest, unless there's a famous patient/victim, like the Brazilian model.

CNN: The "double membrane" makes it harder to fight these infections; why? Why are they so tough to fight?

Now, these gram-negatives have become resistant to carbapenems; these are the "smartest" antibiotics. It's not likely we're going to find one drug that overcomes every enzyme; it will be more likely a variety of approaches and drugs.

CNN: Are antibiotic drugs hard to get into a clinical study?

Boucher: It's definitely harder than getting drugs for diabetes or obesity, something you take your whole life. Also, there are regulatory hurdles for people trying to make antibiotics. We're trying to make paths more clear for developing new antibiotics. We hope that encourages investment back in this area.

[The National Institutes of Health] this week signaled interest in sponsoring some studies in this area. The NIH hasn't traditionally been into antibiotic development, so that's promising. Government agencies and industry are banding together to get this done. I see that as good news.

CNN: Is this a big public health problem now or on the horizon?

Boucher: This is a public health problem now. The problem is here and now. Doctors have had people in their hospital succumb to these infections. Maybe there is one, and sometimes no, option for treatment.

Boucher: We at IDSA advocate a three-pronged strategy for fighting these gram negative infections:

1) Infection control: prevent people from getting an infection in first place.