Attaining those 'six-pack' abs is only half the battle 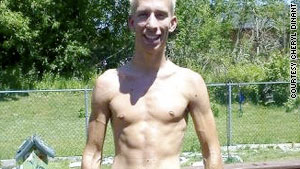 Jason Dinant dieted and exercised his way to a six-pack this June as part of his New Year's resolution in 2009.

(CNN) -- For the first half of 2009, Jason Dinant morphed into a gym rat. He worked out four times a week in a gym cycling on a stationary bike, lifting dumbbells and doing hundreds of sit-ups to attain his New Year's resolution of having "six-pack" abs.

He ditched the junk food and scarfed down 16 hard-boiled egg whites, one and a quarter pound of meat and four cups of vegetables a day.

After six months of diet and workouts with a trainer, the fruits of his labor surfaced from his stomach in June. He got his six-pack.

But months later, reality set in. After relaxing his diet and fitness routine, Dinant's six-pack whittled down to a two-pack.

"I got worn out from working out and took a break from it," said the 28-year-old.

Six-packs are difficult to maintain because they require less than 10 percent body fat, said Jordan Yuam, a fitness trainer and owner of Jordan's Virtual Fit Club in Valencia, California, who was not associated with Dinant's fitness.

"It's really, really hard to keep that up," said Yuam, who trained "Twilight" actor Taylor Lautner.

"Most people, in terms of bodybuilding or any kind of figure modeling, they have something called off-season training. They're going to look best during competition time. People don't realize there's two different worlds of the human body that you generally don't see when they're in magazines. They think they look like that year-round -- it's not true."

Even bodybuilders need a break from the intense workouts. And Dinant plans to follow that route.

"I have friends who are bodybuilders," said the Las Vegas, Nevada, resident. "Two months before competition, they're in competition mode. Then they relax, then go back to competition mode. They don't put stress on the body 24/7. They regulate it for certain things. I found that's the best thing for me. I still do my ab routine. I'm not as strict though."

Switching between intense and moderate training is not harmful, because the body needs a break, Yuam said.

"It's like an Ironman athlete," he said. "There are times you're working out really hard, and you cool down and rest and go back at it."

Dinant was one of the contributors chosen last January when CNNhealth.com asked viewers to submit their 2009 New Year's resolutions and chronicle their journey to change on iReport.com.

His public quest for a six-pack also landed him a spot on the New York City Lesbian, Gay, Bisexual and Transgender Pride March in June. That afternoon, after parading around shirtless and flaunting his newly sculpted stomach, he felt a pang.

I do feel like it was the best thing I ever done. I'm happy I went that course this year.
--Jason Dinant about his fitness resolution
RELATED TOPICS

As the festivities wrapped up, Dinant dashed across the street to sink his teeth into a footlong sausage sandwich sold by a street vendor. He also wolfed down a pastry. "Then I got a stomachache," Dinant said.

But Dinant is not mourning the loss of his six-pack.

"I eat a lot more vegetables than I ever did," he said. "I still eat zucchini and rice. It makes you feel better. ... I do feel like it was the best thing I've ever done. I'm happy I went that course this year."

He credits this year's fitness resolution for getting him healthier.

"I find that there's a happy medium for me," Dinant said. "I eat healthier. I'm happier. I'm at the shape I'm happy at."

Despite the bevy of taut and toned bodies on magazine covers, better body self-image is important, said Yuam.

"People need to realize you can't look like that year-round. The magazines and their covers, they're all 'Photoshopped.' That's not what they look like. Acceptance is something that people don't understand."

While six-packs are possible to build in several months, Yuam cautioned that the feature doesn't serve any health function.

But for those who seek tighter abs, here are more of Yuam's tips:

-- Diet is a big part of the battle. Avoid starchy carbohydrates before going to bed. Incorporate good fats such as avocado and olive oil into the diet. Eat frequent, small meals.

-- When picking food, go the caveman route. Does this product occur in nature or come from trees? If not, try to avoid it.

-- Most people spend pointless hours in the gym, because they are not following proper technique. When people work on their torso, they may be swinging too much or using too much momentum. "It's not a race," Yuam said. "You want to feel them, doing 15 minutes the right way, that's equivalent to doing an hour the wrong way."

-- Work on your abs every other day, because overworking your abs won't give you results. "There has to be time for recovery for the muscles to come in," he said.