Being choosy about booze helps avoid hangover -- to a point 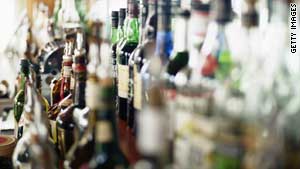 (Health.com) -- As holiday revelers lift their glasses at office parties and New Year's bashes, they may want to keep one rule of thumb in mind: the darker the liquor, the bigger the hangover.

Although it sounds like an old wives' tale, it's actually true -- to a point, according to a new study.

Compared to clear liquors like vodka and gin, brownish spirits like whiskey and rum contain greater amounts of congeners, substances that occur naturally or are added to alcohol during the production and aging process. Congeners -- many of which are toxic -- contribute to an alcohol's unique color, odor, and taste, but they can also interfere with cell function and punish your head and belly the morning after.

Congeners aren't completely to blame for the pain and sluggishness of a hangover, however. The alcohol itself is the main culprit, with congeners playing a relatively small role, according to the study, which compared the aftereffects of drinking bourbon versus vodka.

Health.com: Do you have a drinking problem? 4 questions to ask yourself

"Bourbon does make people feel somewhat worse, but the bourbon isn't the whole story," says lead study author Damaris Rohsenow, an associate director at the Center for Alcohol and Addiction Studies at Brown University, in Providence, Rhode Island. When it comes to the severity of a hangover, says Rohsenow, "bourbon jacks it up a bit, but the increase in how sick people feel is not enough to affect their performance."

In the study, 95 people between the ages of 21 and 35 were served either Wild Turkey bourbon or Absolut vodka (which have roughly the same alcohol content) mixed with caffeine-free Coke, which was designed to mask the taste of the liquor. According to the study, bourbon, which is aged in oak barrels, has 37 times as many congeners as vodka, which is heavily filtered to remove impurities.

The people who drank bourbon reported more severe hangovers than the people who drank vodka, but they weren't any less alert. Regardless of liquor type, drinkers were 2 percent slower on a series of performance tasks the next day than a control group that didn't drink at all, according to the study, which was published today on the website of the journal Alcoholism: Clinical and Experimental Research.

Being 2 percent slower may not seem like a lot, and indeed, it's not likely to matter for most everyday activities, says Rohsenow. "But that could make a difference if they have to respond to a situation in a car, or if they're running a conveyor belt in a factory and they're slower to react to a situation where something's going wrong."

The study's findings may not necessarily translate to your holiday party, however. You could feel much worse in the morning if you drink more than the study participants.

The drinking in the study was relatively moderate compared to some News Year's Eve binges. The average blood-alcohol content of the participants was 0.1 percent, somewhere between "mildly intoxicated" (0.09) and "visibly drunk" (0.15), says John Brick, the author of "The Doctor's Hangover Handbook."

"You might look at someone at those levels and think, 'They've been drinking; they're having a good time, being a little silly,' but you probably wouldn't see slurred speech, stumbling, those types of things," says Brick.

Health.com: Signs you're headed for a holiday meltdown

Rohsenow's team purposefully kept the blood-alcohol content low for safety reasons, but even so, she suggests that some of the participants were quite drunk. "As it was, we were dealing with a fair amount of vomit," she says. "The research assistants are troopers."

Once you're visibly drunk, the amount of congeners in your beverage of choice isn't likely to make or break your hangover. Since you've already ingested so much alcohol, you're apt to get a hangover no matter what, according to Brick, who is also the executive director of Intoxikon International, a company that provides consulting services for alcohol research.

Moreover, it can be difficult to tell just by looking how many congeners a beverage contains. Although the lighter-is-better rule tends to hold for hard liquor, the congener content of wine and beer can vary considerably.

Health.com: The 8 worst holiday foods (and what to eat instead)

A 1981 analysis of the congener content of various alcohols found, for instance, that rosé wine had 20 percent more congeners than darker-colored burgundy, and that Budweiser had more than twice as many as Miller, even though the beers are roughly the same hue.

It's often said that the only foolproof way to prevent a hangover is not to drink at all. Brick agrees, but if you decide to indulge, he recommends the following regimen to avoid -- or at least minimize -- a hangover.

While you're drinking, intersperse drinks of water and alcohol. Before you go to sleep, "drink as much water as you can comfortably consume," he says. (Taking Alka-Seltzer or aspirin at this stage can also be helpful.) And when you get up in the morning, Brick says, "have some Gatorade or other sports-type drink to replenish lost fluids, vitamins, and minerals from your night of debauchery."

Rohsenow's study was funded with grants from the National Institute on Alcohol Abuse and Alcoholism.

Hangovers have been estimated to cost the United States $148 billion in lost productivity each year, and research suggests that light-to-moderate drinkers are responsible for the bulk of that. According to one study, these drinkers cause 87 percent of alcohol-related problems in the workplace, most of which are due to hangovers.