Mom fights, gets the delivery she wants

By Elizabeth Cohen, CNN Senior Medical Correspondent
Joy Szabo changed homes so she wouldn't be forced to have a C-section. Marcus Anthony was born vaginally on December 5.
STORY HIGHLIGHTS

(CNN) -- Seven months into her pregnancy with her fourth child, Joy Szabo's obstetrician gave her some news she didn't want to hear: Because she'd had a previous Caesarean section, the hospital where she planned to deliver was insisting she have another one.

Szabo wanted a vaginal delivery, and argued with hospital executives, but they stood firm: They refused to do vaginal births after Caesareans (VBACs) because they have a slightly higher risk for complications.

After they lost that fight, Szabo and her husband, Jeff, made an unusual decision. About three weeks before her due date, Szabo moved nearly six hours away from their home in Page, Arizona, to Phoenix to give birth at a hospital that does permit women to have VBACs.

In the end, the Szabos got the birth they wanted. On December 5, their son Marcus Anthony was born in Phoenix via an uncomplicated vaginal delivery, weighing seven pounds and 13 ounces.

"It's a tough situation. Mom is tired. Dad is tired and nervous, and most people haven't spent their lives reading obstetrical textbooks...
--Dr. Bruce Flamm

"It was such an easy birth," Szabo says. "I was in the pains of labor for about four or five hours, then I pushed once, and he popped out."

The Szabos' story has a happy ending, but it shows that with the rising C-section rate -- now one in three babies is born via Caesarean -- women who want vaginal births sometimes have to fight to get them.

That fight is especially difficult when the decision to perform a Caesarean is made in the delivery room when there's often not much time to talk and consider all the options.

"It's a tough situation," says Dr. Bruce Flamm, a spokesman for the American College of Obstetricians and Gynecologists. "Mom is tired. Dad is tired and nervous, and most people haven't spent their lives reading obstetrical textbooks and don't know all the details involved." 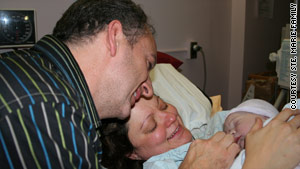 Dina Ste. Marie was told she'd need a C-section, but a simple change in position allowed Isabella to come out vaginally.

Dina Ste. Marie, from Whitby, Ontario, remembers a tense moment in the delivery room three years ago when she was in labor with her first child. She'd been eight centimeters dilated for six hours, and the baby wasn't budging.

"We were near the end, but it just wasn't ending," she remembers.

When her obstetrician suggested she might be headed for a C-section, her doula, Stefanie Antunes, remembered a maneuver she'd seen midwives use to get a reluctant baby to come through the birth canal.

"Stefanie said if I laid down flat on my back it might help the baby get in a new position," Ste. Marie says. "I distinctly remember the labor nurse looking at her like she had 10 heads, but she said, 'You can try it if you want.' "

Ste. Marie got on her back, and the baby started moving around. Twenty-five minutes later, her daughter, Isabella, was born.

"It was such a major relief," says Ste. Marie. "I really wanted to avoid a C-section if I could."

Not every mother wants to avoid a C-section -- in fact, some request them -- but if you do, here are some tips for what to ask your doctor (or midwife) in the delivery room if the suggestion is made that it's time to give up on a vaginal birth and head to the operating room.

Video: How to get the birth you want

Sometimes you need a C-section to save your life, your baby's life, or both. In those cases, there's no room for discussion.

Delivery room emergencies include excessive bleeding, a breech position where the baby is headed out foot-first, or when the baby has certain heart rate problems, according to Flamm.

"In these situations, this is not a good time to talk about your desires for a natural birth," Flamm says.

This is a very tough discussion to have in the delivery room. You're vulnerable, because you're talking about your baby's well-being.
--Debbie Levy, certified nurse midwife

2. "Doctor, what would happen if we waited an hour or two?"

The vast majority of the time, when your doctor or midwife tells you it's time for a C-section, it's not an emergency, Flamm says.

In many cases, women just need more time to labor, he adds. In fact, he says the No. 1 reason for a C-section is "failure to progress" during labor. "If that's what we're talking about, then it's not an emergency," he says.

3. "Doctor, are you sure the baby is too big for me to deliver?"

Sometimes parents are told a baby is too big to deliver vaginally. Dr. Ware Branch, medical director of women and newborns clinical program at Intermountain Healthcare in Utah, says parents should ask whether a C-section is absolutely necessary, especially if labor hasn't advanced very far.

"If it was my wife in labor and she's three or four centimeters dilated and the obstetrician says the baby's head is too big and she can't deliver him, I'd say, 'Nonsense, she hasn't really had a trial of labor, doctor.' "

4. "Doctor, is there something else I can try before having a C-section?"

Antunes, a spokeswoman for DONA International, which certifies doulas, says there may be options such as maneuvers like the one she used on Ste. Marie to get a slow labor moving.

You shouldn't be afraid to speak up and say you'd like to try to labor longer.
--Debbie Levy, certified nurse midwife
RELATED TOPICS

5. "Doctor, can we talk more about the baby's heart rate?"

If you're told you need a C-section because of the baby's heart rate, try to get your doctor or midwife to be as specific as possible.

Some heart-rate problems mean a C-section is necessary immediately, but other types of heart-rate issues are not nearly as serious, and you may be able to labor longer.

"This is a very gray area," says Debbie Levy, a certified nurse midwife in Marietta, Georgia. "It takes years to learn how to read fetal heart tones, and it's not an exact science."

Levy says it can be difficult to ask these questions when the person delivering your baby says it's time for a C-section, especially since mom and dad are often exhausted.

"This is a very tough discussion to have in the delivery room," she says. "You're vulnerable, because you're talking about your baby's well-being."

But she says as long as it's not an emergency, you should have these delivery room conversations with your doctor or midwife.

"You shouldn't be afraid to speak up and say you'd like to try to labor longer," she says.