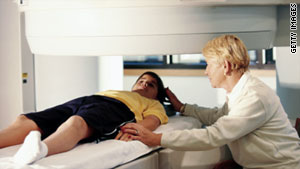 Researchers are trying to figure out what happens in the brain when children have post-traumatic stress symptoms.
STORY HIGHLIGHTS
RELATED TOPICS

A new study published in the Journal of Pediatric Psychology found that children with symptoms of post-traumatic stress had poor function of the hippocampus, a part of the brain that stores and retrieves memories.

This is the first study to use functional magnetic resonance imaging, or fMRI, to look at the function of the hippocampus in youth with symptoms of post-traumatic stress, researchers said. The findings are in line with what has been previously found in adults.

The study was led by Dr. Victor Carrion, and the senior author was Dr. Allan Reiss, both at the Center for Interdisciplinary Brain Sciences Research at Stanford University School of Medicine.

Post-traumatic stress disorder is a condition that children and adults develop in response to a traumatic event. Intrusive memories, increased anxiety and emotional arousal are some of the symptoms, and typically they begin within three months of a traumatic event, according to the Mayo Clinic.

Of youths who have experienced a traumatic event, 3 percent to 15 percent of girls and 1 percent to 6 percent of boys could get a PTSD diagnosis, according to the U.S. Department of Veterans Affairs.

By contrast, an estimated 6.8 percent of the adult American population has had PTSD at some point, the department said.

The condition looks slightly different depending on age -- young children may display "post-traumatic play" in which they repeat themes of the trauma, whereas adolescents may incorporate aspects of the trauma into their lives, carrying a weapon for instance. Also, adolescents are more likely than younger children or adults to exhibit impulsive and aggressive behaviors, according to the Department of Veterans Affairs.

That explanation makes sense, given what is known about post-trauma, said Dr. Sanjay Gupta, CNN's chief medical correspondent and a neurosurgeon. He was not involved in the study. One of the reflexes that can come after a traumatic event is forgetting it, meaning perhaps "the hippocampus shrinks to fade away memories," he said.

"The flip side of it is that you have trouble with memory overall," he said. "You wish you could just forget the event."

Animal studies have shown that brain damage in mice occurs after a trauma has been induced, Haas said.

Gupta said the study is important as researchers try to pinpoint what happens in the brain anatomically when a person has a trauma-related disorder.

The study looked at 27 people ages 10 to 17, which is a reasonable sample size for an imaging study of how the brain functions, said Lisa Shin, associate professor of psychology at Tufts University, who was not involved in the study. Participants were divided into 16 young people who had symptoms of post-traumatic stress disorder and 11 normal youths.

Scientists scanned the participants' brains while they completed a verbal memory test. They read a list of words, then looked at a similar set with additional words and had to remember which words were on the original list.

Participants with PTSD symptoms did worse on the recall portion and showed less activity in the hippocampus during that time than the control group members.

The young people whose hippocampus functioning was the worst were more likely to experience avoidance and numbing symptoms of PTSD -- having difficulty remembering the trauma, feeling isolated and not displaying emotion.

Previous research had found that adults with PTSD tended to have a smaller hippocampus volume.

Measuring neural functioning in the brain can indicate the extent of symptoms that a person is experiencing after a PTSD diagnosis, and reflect the effectiveness of therapy, Haas said. In other words, if the hippocampus is functioning better, that may mean the treatment is working.

If there is enough evidence that the hippocampus is involved in PTSD, a treatment could, in theory, be targeted to it, Shin said. There is some indication that treatment with serotonin reuptake inhibitors, or SSRIs, is associated with memory improvement and increased volume of the hippocampus in adults with PTSD.

Shin and colleagues are working on a twin study to explore whether brain abnormalities in people with PTSD were pre-existing risk factors or the result of PTSD.