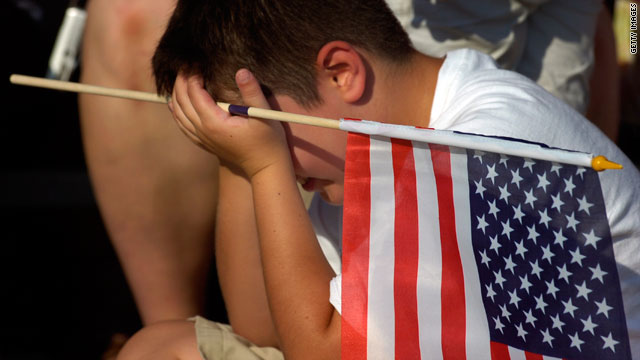 A new study suggests a need for targeted support for children with a parent deployed for multiple months.
STORY HIGHLIGHTS

(CNN) -- Jordan Pittard, 14, remembers feeling anxious about his father being deployed with the U.S. Army in Iraq from 2006 to 2007. His mother, Lucille, a teacher, admits struggling to have enough time to work, take care of the house and talk enough to her kids.

"There was nobody big to look up to," Jordan said. "Sometimes when my mom was away, there wasn't anybody else to help me with my homework, something personal like that, or throw a football with me."

The mother and son participated in a new study that suggests youth from military families may have higher stress levels and emotional problems than other adolescents and teens.

The study was published in the journal Pediatrics just days after President Obama announced his decision to send 30,000 more troops to Afghanistan.

Researchers used a scale that measures anxiety symptoms as they interviewed children and parents about emotional and behavioral health. The study is not diagnostic or clinical, but attempts to understand how children generally are doing, said Anita Chandra, lead author and behavioral scientist at the RAND Corp..

Previous studies on the topic have largely focused on younger children, whereas this study shed light on how preteens and teens fare emotionally, socially and academically, she said.

The study found an association between how long a parent had been deployed in the last three years and the difficulties that children faced.

It also found a link between the mental health of the nondeployed parent at home and the well-being of the child. If the parent is doing worse, the child is doing worse, pointing to the importance of also providing support to parents, Chandra said.

Lucille Pittard feels particularly pressured when her husband serves in leadership positions, which requires her as the spouse to help other military families at the home station. With a full-time job and two children, "it's a heavy burden to bear," she said.

"The main parent at home is trying to juggle so many balls that some of those balls get dropped," she said. "I find it hard to believe that you can do it all, and so by virtue of that, since I'm the adult in the picture, sometimes I don't have time to listen to my kids."

Researchers analyzed data from computer-assisted telephone interviews with military children from 11 to 17 years old and nondeployed caregivers. A total of 1,507 households were screened and agreed to participate, the study said.

Some of the sources of difficulty during deployment that children mentioned were taking on more household responsibilities and missing school activities, she said.

When the parent returned home, children said it was hard to get to know him or her again, and some were worried about the next deployment. Parents' mood changes and how their mothers and fathers were getting along were also challenges.

Jordan Pittard thinks about his father's next potential deployment, too: "I wouldn't say a letdown, but it would kind of hurt if he left again," he said.

The Pittard family is fortunate, though, Lucille Pittard said, that there are two sons, about two years apart, who support each other.

"They fight like cats and dogs, but, boy, they're best friends, too," she said of Jordan and Taylor.

About 30 percent of the children interviewed reported symptoms of anxiety. By contrast, other research has found that 9 to 15 percent of 7- to 11-year-olds meet the criteria for an anxiety disorder in a primary care setting.

There were also some gender differences. Girls had more problems with the reintegration of a deployed parent into the family, the study found.

"A lot of the things they checked off on those questions were related to their anxiety about the parent's next deployment, and just concerns about the emotional health of their family members," she said. "Some people have argued that they may be more in tune with those kinds of things, being girls."

The study points to a need to make sure that programs in place for military families are consistent with the needs of the children, she said. Targeted support for families experiencing multiple months of deployment, and for older teens and girls should be considered, she said.

The National Military Family Association, which provided funding for the study, will use the results in future programming and awareness efforts. Joyce Raezer, executive director of the organization, presented the findings at the Pentagon on Monday.

Raezer has also experienced the issues firsthand, as a wife of a retired service member and the head of an organization that consists of many military spouses.

"I can see the strain when I have an employee or a volunteer whose spouse is on their second or third deployment," she said. "These are brave, committed, dedicated folks determined to do what they need to do, and they work very hard to hold it together, but they're tired."

School counselors, health care providers and religious organization leaders should all be aware of the issue so they can better direct their support, Raezer said. For example, if a mother is bringing her child into the doctor's office with repeated stomach aches, the doctor should ask about whether the family is experiencing a deployment so as to better examine the problem.

"To have this kind of scientifically valid study that confirms a lot of what we as military spouses have been saying and noticing for a long time, it's nice," she said.

The data represents the interviews done in summer 2008, but researchers also followed up with the families twice since then, and will release findings on the next phase in spring 2010, Raezer said.

Despite the challenges, being in a military family has made Pittard and her sons stronger people, she said.

"Are we weary? Yes, yes we are weary. But we're survivors and so we will survive," she said. "We're the type of family that says, 'Let's focus on the positive.' "