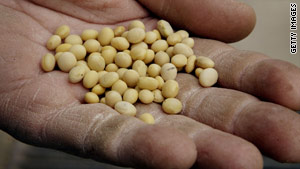 Soy components such as folate, protein, calcium, and fiber may be responsible for health benefits reported in the study.
STORY HIGHLIGHTS

(Health.com) -- Women with breast cancer who eat more soy are less likely to die or have a recurrence of cancer than women who eat few or no soy products, according to a new study.

In the past, physicians have often warned breast cancer patients not to eat soy. The new research represents "a complete turnaround" from the previous understanding about the link between soy consumption and breast cancer, says Sally Scroggs, a registered dietician and senior health education specialist at M.D. Anderson's Cancer Prevention Center in Houston, Texas.

"We have gone from saying, 'No soy for breast cancer survivors' to, 'It's not going to hurt,'" Scroggs says. "Now it looks like we can say, 'It may help.'"

The study looked at more than 5,000 women in China who had undergone a mastectomy; they were followed for about four years. The women who consumed the most soy protein (about 15 grams or more a day) had a 29 percent lower risk of dying and a 32 percent decreased risk of breast cancer recurrence compared to the women who consumed less than about 5 grams of soy protein a day, according to the study, which appears in the December 9 issue of the Journal of the American Medical Association. The National Cancer Institute and the U.S. Department of Defense's Breast Cancer Research Program funded the study.

Health.com: How to take care of yourself after breast cancer surgery

We have gone from saying, 'No soy for breast cancer survivors' to, 'It's not going to hurt.' Now it looks like we can say, 'It may help.'
--Sally Scroggs, R.D.
RELATED TOPICS

Soy foods--such as milk, tofu, and edamame--are rich in naturally occurring estrogens (especially isoflavones) that can mimic the effects of estrogen in the female body. Because the most common types of breast cancer depend on estrogen to grow, experts once feared that soy isoflavones could stimulate the estrogen receptors in breast-cancer cells, even though the estrogens in soy are much weaker than those produced by the body.

Health.com: 'I stayed in control of my breast cancer treatment'

The current study suggests the exact opposite: Soy may actually reduce the amount of estrogen that's available to the body.

"Soy isoflavones may compete with estrogens produced by the body. Soy isoflavones may also reduce the body's production of estrogen, and increase clearance of these hormones from the circulation--all of which together reduce the overall amount of estrogen in the body," says the lead author of the study, Dr. Xiao Ou Shu, M.D., Ph.D., a cancer epidemiologist at the Vanderbilt-Ingram Cancer Center of Vanderbilt University Medical Center in Nashville, Tennessee.

Shu says, however, that factors beyond estrogen may be at work. Other components of soy foods, such as folate, protein, calcium, or fiber (or some combination thereof) may also be responsible for the health benefits reported in the study, she says.

Health.com: New breasts to go with my cancer-free life

The new findings, which seem to contradict what many women have heard from their doctors over the years, could prove perplexing for women such as Andrea Mulrain, 44, a former music executive who was first diagnosed with breast cancer 10 years ago.

After her diagnosis, Mulrain's doctors told her to steer clear of all soy foods because these foods could encourage the growth of cancer cells. Mulrain had estrogen-sensitive breast cancer, which means that estrogen helps the cancer grow.

Her doctors eventually softened their stance a bit, and said she could consume soy in moderation. "I pretty much avoided soy for 10 years after diagnosis but recently was told it was OK to have soy in moderation as long as I read the labels and make sure it's not the main ingredient in any food," says Mulrain, who is currently being treated for a recurrence.

In the study, the association between soy consumption and lower risk of death and cancer recurrence was seen in women like Mulrain with estrogen-sensitive breast cancers, and in women taking tamoxifen, a drug designed to prevent cancer recurrence by blocking the effects of estrogen in the breast tissue.

Health.com: What you need to know if you choose breast reconstruction

Despite the study's findings, the final verdict on soy and breast-cancer recurrence is not yet in, according to an accompanying editorial written by Dr. Rachel Ballard-Barbash, M.D., of the National Cancer Institute in Bethesda, Maryland, and Marian L. Neuhouser, Ph.D., of the Fred Hutchinson Cancer Research Center in Seattle, Washington.

The follow-up period in the new study was relatively short, they say, and breast-cancer diagnosis and treatment may be different in China compared to the United States. Similarly, there may be differences in the types of soy foods that Chinese and American women eat. (In general, Chinese women consume significantly more soy than American women.)

More studies are needed to confirm these findings, especially as they apply to women with estrogen-sensitive breast cancer or those who take drugs such as tamoxifen to keep breast cancer at bay, say Ballard-Barbash and Neuhouser. Still, they say, "Patients with breast cancer can be assured that enjoying a soy latte or indulging in pad thai with tofu causes no harm, and when consumed in plentiful amounts may reduce risk of disease recurrence."

The study should be reassuring to women who have been trained to steer clear of soy, says Scroggs. "Don't freak out if there is some tofu mixed in with your vegetables at an Asian restaurant," she says.

Health.com: Breast cancer -- What should I do if I'm high risk?

Her soy prescription for breast-cancer survivors? "Eat soy in moderation, and your soy proteins should come from foods, not concentrated supplements," she says. "Soy is a complete protein so it is high in fiber and has a place in a healthy, balanced diet."

Eating more soy is beneficial because it tends to replace less healthy foods in people's diets, Scroggs says. "When people are eating soy protein, they are likely eating less of something else, such as red meat," she says.