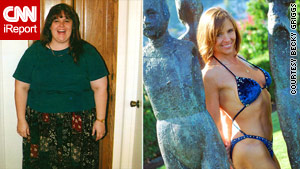 (CNN) -- These days, Becky Griggs starts her morning well before the sun comes up, in time to meet her clients at the gym at 5:30. It's a big change from six years ago, when she was 352 pounds and, as she calls it, engaged in a "slow form of suicide."

She said that growing up, she was always the pudgy kid, but in hindsight, she was only slightly overweight. In her mind, though, she was a fat girl.

"We are taught what is slim and skinny and pretty and right," she said recently by phone, "but in reality, what is fit and healthy is a different thing."

Positive self-image means a lot, she said, and it has been the key to her losing more than 200 pounds.

Name: Becky Griggs, a 43-year-old fitness trainer from Oregon City, Oregon. She teaches four days a week. Before she became a trainer five years ago, she operated a yarn shop. She is a married mother of two children in their early 20s.

Background: One of the things that began to worry Griggs as an adult was her blood pressure. For years, it was low, but when it started to climb, that really caught her attention.

She also was worried about needing help from her husband. Just walking back from the bathroom in the middle of the night became a nightmare. She would return to bed and worry that she was going to pass out and die.

"I used to lay in bed awake, and my heart was racing so hard that I was afraid, and I wanted to make sure that if I needed help that I was cognizant of that," she said.

How much she lost: At her heaviest, she was 352 pounds. When she competed in a body-building contest this year, she weighed 139 pounds. Most of the time, she weighs about 150.

How she lost it: "Calories in versus calories out," she said. Like many overweight people, she had a bookshelf of diet plan books. But she needed to go back to what she called a super-simple plan of five small meals a day, focused on protein and something "God grew." About 80 percent of what she ate to lose weight was protein.

Sugar and flour were out. She refers to it as clean eating. It sounds easy, she says, but when you start reading labels closely, you see how many foods have sugar in them. That includes most protein bars, which Griggs says are basically candy bars.

How she's keeping it off: She's not always eating clean, she said. But she plans ahead to counteract the moments of being "naughty."

"Food doesn't control me anymore, I control it," she said. "And I work out."

She loves being fit, she said. Muscles burn more fat, and they fit better in your clothes, she pointed out. Working out and getting sweaty is the best thing you can do for yourself each day, she said.

Read about other success stories at CNN's Fit Nation

It's more important to lose body fat, she said. All the students in her classes have their body fat pinched at the beginning and pinched again each month. She says it is a much better measure of your health than the height-and-weight charts put together by the government.

She became a fitness trainer to keep her in the gym. She didn't want to go back to "being that other girl," she said. To ensure that she would be faithful to her workouts, she became a trainer.

"It's taken time, but I know now that this me is the me who I am, and that fat girl, she is not me anymore," she said. "I am me because of her, but I won't ever go back to being her."

Advice for others: You have to believe that you can improve your health before you can make dietary and fitness changes. Put positive images in your mind, she said. Picture yourself putting down that hamburger and getting off the couch. And keep doing it.

She also said that morbidly obese people need to come to a reckoning about their weight. Many people who are that overweight are terrified of what they will become if they lose all those pounds, she said. Instead, they hide behind the fat and the food.

She also recommended finding like-minded people. When she was losing weight, she serendipitously found those folks at the gym, and they are a source of positive feedback, too. She also found support at a ballroom dance class.

"I tell clients and people in my classes that when you can look me in the eye and say, 'Oh my gosh, I had brownies and ice cream last night, and it was so good, that's when you have it,' " she said. "If you pick it up and start to eat it, and the negative self-talk starts ... that's when you put it down and say, 'No, thank you.' "