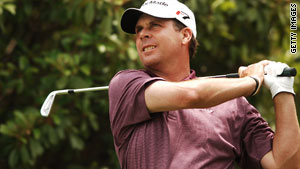 Doug Barron sued the PGA under the Americans with Disabilities Act to get a therapeutic drug use exemption.

(CNN) -- Should a man have to choose between his golf drive and his sex drive?

Doug Barron sued the PGA to get an answer. In November, the 40-year-old from Memphis, Tennessee, became the first player in professional golf to be suspended for doping.

The dope in this case is synthetic testosterone and beta blockers.

Barron, a journeyman who has played Tour events for more than a decade, says he had been taking the blockers to treat a heart condition since 1987. Long banned in Olympic sports from bobsled to diving, beta blockers also reduce anxiety and muscle tremor and can sharpen focus and precision.

Barron has another health problem: extremely low testosterone. Since 2005, he has been getting monthly shots of synthetic testosterone, which is also banned from most professional sports. Testosterone, naturally occurring or synthetic, promotes muscle mass and strength, among other things.

The golfer's natural testosterone count when he was prescribed the shots was 78 nanograms per deciliter of blood. Most healthy men his age have a testosterone level between 300 and 500.

"For anyone with a low count -- and 78 is very low -- it can be very debilitating," said Emory University urologist Dr. Chad Ritenour, who has lectured more than a dozen times this year on testosterone treatments and prescribes it to patients. "The difference it makes for someone's quality of life is really huge. I've had some men come in and give me a hug because they felt so much better on it than off it."

For anyone with a low count -- and 78 is very low -- it can be very debilitating.
--Dr. Chad Ritenour

Barron struggled for years trying to understand why he was chronically fatigued and had trouble putting on muscle. And he had absolutely no sexual desire.

"I didn't want to get out of bed most days, much less do anything in it," he said. "I was always wondering, 'What's wrong with me?' I thought it was in my head and this was something I could fix if I just had the right attitude."

In November, Barron's lawyers filed suit against the PGA under the Americans with Disabilities Act.

U.S. Federal Magistrate Tu Pham shot that argument down but said Barron may have a viable argument pertaining only to the beta blockers.

The PGA refused to answer CNN's questions about Barron's case or discuss its anti-doping program.

The golfer's reliance on the ADA has been compared to a 2001 Supreme Court ruling in favor of disabled golfer Casey Martin, whose degenerative leg ailment prevented him from walking all 18 holes.

The PGA fought Martin for years, denying him a request to ride in a golf cart, arguing that would harm the integrity of the game. After his court victory, Martin played professional golf for three years and then became head coach of the men's golf team at the University of Oregon.

In 2007, not long after Martin settled into his coaching life, professional golf was scrambling again. Hall of Fame golfer Gary Player, then 71, said at a news conference that he knew at least one player who used steroids. The comments came after a reporter asked him directly whether golf had a problem with doping.

"Whether it's [human growth hormone], whether it's creatine or whether it's steroids, I know for a fact that some golfers are doing it," the veteran player said. He refused to name names.

A year later, in July 2008, the PGA introduced its anti-doping policy. Tour officials began educating players on what they could and couldn't take.

CNN asked the PGA how many players on its circuit have been tested.

"While the number of tests is substantial, and we do not get into specifics, we can confirm the number is closer to 1,000 than 600," Tour spokeswoman Ana Leaird wrote in an e-mail. She offered no further comment.

Barron's lawyers are now suing to get the PGA Tour to provide all records, including names, of positive drug tests.

"Doug might have been the first one to be punished, but we think he's not the only one who has tested positive and been given a pass," Rosenblum said.

When the ban went into affect, Barron told the Tour that he was on the blockers and testosterone. He requested a therapeutic use exemption, arguing that he needed them to live normally.

But Barron's attorney said the testosterone levels were within acceptable range because Barron was receiving the shots.

He "just couldn't function at all," Barron said of his attempts to get off the medication. Without the testosterone, he was listless. Without the beta blockers, he was having chest pains.

"I took a risk I should have known better than to do, and I got a shot of testosterone" in July just before the St. Jude Classic in Memphis, where he failed a random drug test.

Colorado attorney Rich Young, one of the world's anti-doping experts and famous for leading the winning case against 2006 Tour de France champ Floyd Landis for the use of synthetic testosterone, spoke with the Golf Channel about the Barron case.

"When he was told he couldn't do [testosterone], he may not have liked the decision, but for him to ignore the decision is a flat-out intent to violate the rules," Young said, according to the Channel.

Young, who helped the PGA craft its policy, also addressed an accusation Barron has lobbed: If he were a more important player, he would not have been treated the same way.

Barron's lawyers have pointed to golfer Shaun Micheel, who was granted a therapeutic exemption for abnormally low testosterone by the Tour in 2005 and was allowed to use synthetic testosterone.

In August 2006, Micheel was runner-up to Tiger Woods at the PGA Championship -- a major tournament he won in 2003 -- and defeated Woods in the first round at the 2006 HSBC World Match Play Championship. According to the PGA Web site, Micheel has earned $8 million since he went pro in 1992.

Barron is far from a rock star in his sport. He reportedly earned about $33,000 last year, and during the previous eight seasons on the PGA Tour, his top finish was a tie for third place at the 2006 Byron Nelson Championship, one year after he began testosterone therapy.

The only major headline Barron has claimed in his career came that same year, when he took his white polo shirt off during a tournament to wade into a marshy part of a course. Players reportedly chuckled at Barron's protruding gut.

"I had a tire. If taking testosterone makes you look like that, then maybe testosterone doesn't work the way everyone assumes it does," he said.

"He may not have done it to become Barry Bonds," Young told the Golf Channel. "But he was told what the rules were and chose to break them."