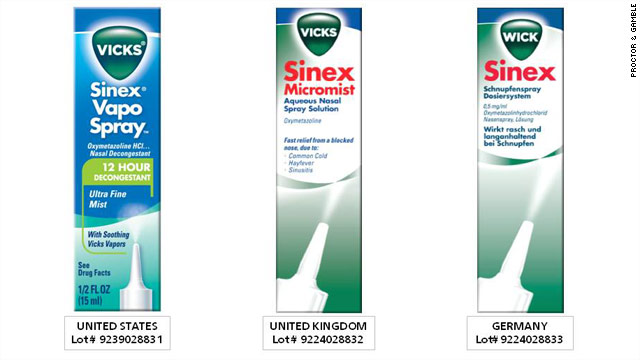 Procter & Gamble said it announced the voluntary recall after finding the bacteria in a small amount of product made at a plant in Germany.

There have been no reports of illness from the bacteria, but it could cause serious infections for people with weakened immune systems or those with chronic lung conditions such as cystic fibrosis, Procter & Gamble said late Thursday.

Cincinnati, Ohio-based Procter & Gamble said it detected the problem during routine quality control at the plant. Analysis so far shows the problem is limited to a single batch of raw material mixture involving three lots of product, which were sold only in the three countries affected by the recall, the company said.

In Germany, the recalled product is Wick Sinex Schnupfenspray Dosiersystem with lot number 9224028833.

All recalled products are in the 15-milliliter size.

Lot numbers are listed on the outer carton and the bottle, the company said.

Consumers with the product should discard it, and they may call the company for a replacement coupon or refund, the company said. More information is at the company's Web site, www.pg.com.