'I want my mammograms!' 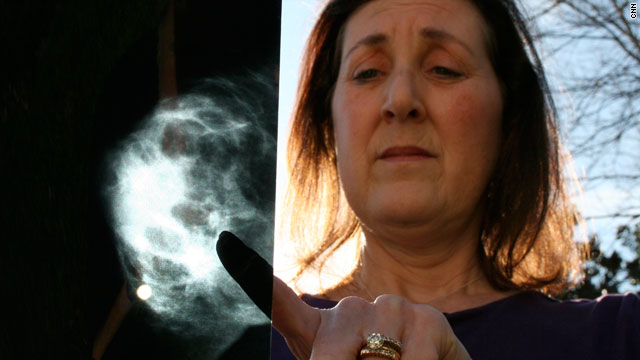 Sara Fought was 42 when a routine mammogram caught her breast cancer.
STORY HIGHLIGHTS

(CNN) -- A government task force says women in their 40s don't need annual mammograms, but Sara Fought would beg to differ: She says she's alive today because a routine mammogram found cancer when she was 42.

"I had to read the guidelines twice because I really couldn't believe women in the 40-49 age bracket were being discouraged from having mammograms," says Fought, who lives in Chevy Chase, Maryland. "That's foolhardy. They're playing with people's lives."

Fought is one of many breast cancer survivors and doctors who are outraged over the guidelines released Monday by the U.S. Preventive Services Task Force advising against routine mammograms for women in their 40s.

The task force doesn't argue that mammograms have saved the lives of many women like Sara Fought. In fact, the task force mentions in its statement that for every 1,000 women in their 40s who receive routine mammograms, two cases of cancer are detected. However, it also notes that 98 women will have "false positives." In other words, the mammogram will pick up something that looks like cancer, but that further testing shows actually is not.

In its statement, the task force wrote that on balance, routine mammograms for women in their 40s aren't worth the downsides, such as false positives and the exposure to a small amount of radiation.

Sebelius says the doctors and scientists on the task force "do not set federal policy, and they don't determine what services are covered by the federal government."

Watch HHS Secretary Sebelius explain the impact of the change

Lucy Marion, Ph.D., a nurse practitioner and member of the task force, says she chose not to get regular mammograms when she was in her 40s.

"The benefit is small," Marion says, adding that groups like the American Cancer Society have been overzealous in recommending mammograms to women in their 40s.

Watch an interview between Dr. Gupta and Lucy Marion

Marion, dean of the school of nursing at the Medical College of Georgia, says that while there are women like Fought, there are also women who had bad experiences with mammograms.

"A woman called me today and said, 'Thank goodness for the new guidelines because I've had so many unnecessary biopsies and they have been painful and they've been costly, and I have had to pay for some of them out of pocket, and every time it was benign,' " she says.

What is the Preventive Services Task force?

Andrea Evans says she hopes women in their 40s and their doctors will ignore the task force's recommendations.

"I want to scream, 'No! No! Don't listen!' " says Evans, whose cancer was detected by a routine mammogram eight years ago when she was 46. "If I hadn't had that mammogram, I wouldn't be here today."

Discouraging women in their 40s is the wrong message to be giving women.
--Sara Fought

Dr. Rachel Brem, director of breast imaging and intervention at the George Washington University Medical Center, says she's already concerned that women may be canceling their mammograms because of the task force's recommendations.

"Usually we see 26 women in a morning for mammograms, but today we only saw 17. That's a significant decrease," says Brem, adding that she can't be sure the lower number was because of the new guidelines.

She added that while mammograms do sometimes cause needless worry over a false positive, she thinks women are willing to put up with that. "Every single one of my patients would trade a minimal amount of anxiety for an early breast cancer diagnosis any day," she says.

Watch one mammography expert's reaction to the change

A woman called me today and said, 'Thank goodness for the new guidelines because I've had so many unnecessary biopsies...'
--Lucy Marion, Ph.D., R.N.
RELATED TOPICS

Dawn Marie Jones, whose cancer was detected by a routine mammogram last year when she was 40, also is "horrified" by the new guidelines.

"I wept when I watched the news last night. I couldn't believe this was real," Jones says.

She says she worries that insurance companies, which pay close attention to the recommendations of the U.S. Preventive Services Task Force, might start refusing to pay for mammograms for women in their 40s based on the new guidelines.

Watch more on who'll pick up the mammography tab

"I worry about my little sister. This year she'll be the age that I was when I was diagnosed. It concerns me she might be denied the access I had," she says.

In 20 states, insurance companies are required to pay for mammograms for women over age 40, according to the National Women's Law Center. However, these laws don't apply to women who work for companies that self-insure their policies. Slightly more than half of all Americans who receive insurance through their employer work for a company that self-insures, according to the Kaiser Family Foundation.

Susan Pisano, a spokeswoman for America's Health Insurance Plans, an insurance industry group, says insurance companies will continue to pay for mammograms for women in their 40s. "If your insurance company won't pay, I think you should go back and challenge them on that," Pisano says.

But Nancy Davenport-Ennis, co-founder of the Patient Advocate Foundation, says she thinks insurance companies will use the guidelines as an opportunity to deny coverage to women in their 40s.

Sebelious disagrees. "I would be very surprised if any private insurance company changed its mammography coverage decisions as a result of this action."

It costs "$640 and up" to get a mammogram when you don't have insurance, according to Paul Keckley, executive director of the Deloitte Center for Health Solutions.

Keckley and other observers think insurance companies will continue to cover mammograms for women in their 40s despite the new recommendations.

"It would be a PR disaster for them to pull back on coverage of breast cancer prevention screening," says Art Caplan, a bioethicist at the University of Pennsylvania. "They're not going to do it. It would be a nightmare."

"Make sure your physician raises hell"

If your insurance company starts refusing to pay for mammograms, Keckley says to get your doctor on your side.

"You should make sure your physician raises hell about it," Keckley advises.

You can also seek a free or reduced price mammogram offered by the Centers for Disease Control and Prevention's National Breast and Cervical Cancer Early Detection Program. The American Cancer Society has a list of free mammogram services by ZIP code, and the American Breast Cancer Foundation provides financial assistance for mammograms.

Just because a task force has recommended something does not mean it's set in stone.
--asouth927, from Soundoff

Fought, who had a mastectomy and chemotherapy after her breast cancer diagnosis, says she hopes women will listen to the American Cancer Society and the American College of Obstetricians and Gynecologists, both of which still recommend routine annual mammograms starting at age 40.

"Discouraging women in their 40s is the wrong message to be giving women," she says.