Who decides about mammograms? Inside the task force 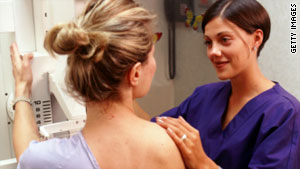 The task force, a federal advisory board, said this week that women should not begin routine mammograms until age 50, contradicting the well-established advice that women 40 and older should be screened.

Groups such as the American Cancer Society and Susan G. Komen for the Cure have opposed the new guidance.

What is this task force, and what is its authority?

The task force first came together in 1984 and is the "leading independent panel of private-sector experts in prevention and primary care," according to its Web site. It has 16 participants -- here's the full list of members.

While the task force does not have any oncologist members, the panel chose a team of cancer experts who reviewed an array of evidence. This team consisted of four oncologists, a cancer surgeon and a cancer researcher. They then put together a report and presented the evidence to the 16-person panel.

The cancer experts themselves do not decide what screening is appropriate -- they just present the evidence. It is the task force that makes the final decision.

Despite it being a federal advisory board, doctors and scientists on the task force "do not set federal policy and they don't determine what services are covered by the federal government," Health and Human Services Secretary Kathleen Sebelius said Wednesday.

"The task force has presented some new evidence for consideration, but our policies remain unchanged," she said. "Indeed, I would be very surprised if any private insurance company changed its mammography coverage decisions as a result of this action."

Read more about the statement from Sebelius

Most of the member companies of American Health Insurance Plans, an association of more than 1,300 health insurance providers, look to the task force as the standard, said Susan Pisano, spokesperson for the insurance group.

"But if you are in your 40s and have a discussion about risk and benefits and your doctor gives you a referral slip, then that generally is going to be covered," she said.

The task force's approach to issuing guidelines is based on data, said Dr. Heidi Nelson, who presented background research to the task force regarding breast cancer screenings but is not affiliated with the group.

"They're very evidence-based, and if you don't have data that shows something works, they'll be hesitant to recommend it," she said.

The trend applies generally to new health guidance that limits practices that were already in place, he said. Advocacy groups tend to highlight anecdotal cases of people who benefited from the treatment or procedure in question -- for instance, a 40-year-old woman whose tumor was detected by a mammogram, he said.

But groups such as the American Cancer Society have said that they've looked at virtually the same data and have still decided to stick with the guidance that women should begin routine mammograms at age 40.

Rowe, who is not a member of the task force, was chairman and CEO of insurance giant Aetna Inc. from 2002 to 2006. The task force recommendations strongly influenced the company's decisions to cover or not cover preventive procedures, he said.

During that time, most of the task force's recommendations were for more tests, not fewer, he said.

"My guess would be that many insurance companies would consider changing their coverage recommendation based on the report" about mammograms, he said.

Still, he noted that some companies that buy insurance for their employees will set up special coverage plans for services that are not normally covered. That means that even if a major insurer decides to cover mammograms only starting at age 50, a company can choose to specifically get mammograms covered for those 40 and up, he said.

This is not the first time the task force has issued recommendations that do not match those of other respected medical organizations.

On diabetes, the task force has a narrow focus for screening. It recommends screening asymptomatic patients with a sustained blood pressure of more than 135/80 mm Hg, treated or untreated. (High blood pressure is a risk factor for diabetes.)

The American Diabetes Association, on the other hand, recommends all adults be tested beginning at age 45, or earlier if they are overweight (with BMI at least 25) and have additional risk factors. These factors include physical inactivity and a first-degree relative with diabetes.

This disagreement is far less powerful than the mammography issue, however, and there have not been any relevant issues about insurance coverage, said Dr. David Kendall, chief scientific and medical affairs officer for the American Diabetes Association.

The task force is also giving different guidance than the American Cancer Society with regard to prostate and colon cancer screening.

In 2008, the task force said that men 75 and older should no longer get screened for prostate cancer and that there's not sufficient evidence to evaluate the costs and benefits of the screening to men under that age. The American Cancer Society agrees that there is insufficient evidence for or against screening generally, but does not have a cutoff age.

Similarly, the task force recommends against routine screening for colon cancer in adults ages 76 to 85, and against any screening after age 85, while the American Cancer Society does not have an age cutoff. The task force also does not recommend certain procedures such as CT colonography, while the American Cancer Society does.

Dr. Kathie-Ann Joseph, a surgeon at Columbia University Medical Center in New York, criticized the task force for not coming out with any public education to explain to women how they should interpret conflicting messages about mammograms.

"I feel as if we've sent so many mixed messages to women, especially about breast cancer," she said. "At this point, the average woman on the street is confused."

Anecdotally, she doesn't know any of her colleagues who support the new task force recommendations.

"You can say there is no evidence that this saves lives, but we don't know which group of women will benefit from screening and which ones won't," she said.

Until that gets sorted out, she says, women need to speak with their physicians, use common sense and continue to get mammograms.

Rowe, on the other hand, is "aghast" that certain agencies and individuals are backing away from following the task force's conclusions.

"If we're not going to rely on the scientists, why have them do the evaluations? I'm concerned that women will continue to get exposed to the damaging effects of radiation without apparent benefit," he said.