Risks of daily aspirin may outweigh the benefits 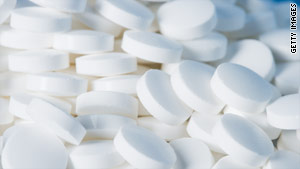 (Health.com) -- Taking a low-dose aspirin every day can help prevent heart attacks in people who've already had one. But if you've never had a heart attack (or stroke), the risks of taking a daily low-dose aspirin outweigh the benefits, according to a U.K. report published in Drug and Therapeutics Bulletin.

About 50 million Americans take low-dose (325 milligrams per day or less) aspirin to prevent cardiovascular problems. Some do so even though they don't have heart disease or a history of heart attack or stroke, an approach known as primary prevention.

Currently, the American Diabetes Association (ADA) recommends low-dose aspirin for primary prevention in people with diabetes who are at risk for cardiovascular disease--but this will be changing. (Diabetes can dramatically increase the risk of developing heart disease.)

"Because of some recent studies suggesting that the benefit is not very large, and because aspirin can also have risks (intestinal bleeding or hemorrhagic stroke), the January 2010 recommendations will recommend it mostly for higher-risk people than was the case in the past, when it was recommended for people with more moderate levels of risk and above," says Dr. M. Sue Kirkman, the vice president of clinical affairs for the ADA.

The authors of the new analysis say there's not enough evidence to justify the routine use of low-dose aspirin to prevent cardiovascular disease in apparently healthy people, including those with elevated blood pressure or diabetes.

Kirkman stresses that people with diabetes who are taking aspirin--and have no history of heart attack--should talk to their doctor and see if he or she recommends continuing the therapy.

"There isn't a strong rationale to take people off it if they're doing fine," she explains.

Although aspirin thins the blood and helps prevent clots, it is not risk free, according to the U.K. review led by a panel of experts.

For example, the researchers looked at two large studies of people with diabetes (one with 1,276 participants and the other with 2,539) and found that those who took 81 to 100 milligrams of aspirin daily were just as likely to have a heart attack or stroke in the next four to seven years as those who did not.

Aspirin can cause gastrointestinal bleeding and other problems--some of them serious. People who take aspirin daily are two to four times as likely to have upper gastrointestinal problems, such as an ulcer with complications, than those not taking aspirin (even if the aspirin is buffered or has a protective coating to limit stomach problems).

Although aspirin can prevent clots, which cause about 80 percent of strokes, it may increase the risk of hemorrhagic strokes, which are caused by bleeding in the brain.

"This article synthesizes what many people in the field are beginning to feel: The risks of daily aspirin therapy exceeds the benefits in people who have not had a heart attack," says Dr. Steven E. Nissen, the chairman of cardiovascular medicine at the Cleveland Clinic, in Ohio.

In 2004, a U.S. Food and Drug Administration advisory panel rejected the idea of using aspirin for primary prevention.

So who falls into this very high-risk category?

The bottom line? "Do not take daily aspirin therapy on your own," Nissen advises. "This review article emphasizes the need for a dialogue between a patient and provider about the benefits and risks," he says. Risks include gastrointestinal bleeding and a small, but potentially devastating, risk of bleeding in the brain.

"You can't ignore the risk side to the equation," Nissen says.