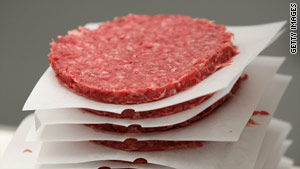 Consumers should ask at their point of purchase if products are subject to recall, the USDA said.
STORY HIGHLIGHTS
RELATED TOPICS

New York (CNN) -- Two people have died and 28 people have fallen ill with matching strains of E. coli after an outbreak in ground beef, the Centers for Disease Control and Prevention said.

Sixteen of those people are in hospitals and three have developed kidney failure as a result of the contamination, the CDC said late Monday.

The U.S. Department of Agriculture announced last week that Fairbank Farms in Ashville, New York, was recalling more than half a million pounds of fresh ground beef products that may be contaminated with a strain of E. coli, a potentially deadly species of bacteria.

The recall was for distribution centers in eight states, but Fairbank Farms said some retailers may have sent the affected beef to other states.

Each package is printed with "EST. 492" inside the USDA mark of inspection or on the nutrition label. They were packaged on September 15 and 16 and may have been labeled at the retail stores with a sell-by date from September 19 through 28, the USDA said.

Consumers should ask at their point of purchase if the products they have purchased are subject to recall, the USDA said.

E. coli can cause bloody diarrhea, dehydration, and in the most severe cases, kidney failure. The very young, seniors and people with weak immune systems are the most susceptible to foodborne illness.

The USDA's Food Safety and Inspection Service advised consumers to safely prepare raw meat products, whether they are fresh or frozen, and only consume ground beef that has been cooked to a temperature of 160 degrees Fahrenheit.

The only way to be sure ground beef is cooked to a high enough temperature to kill harmful bacteria is to use a food thermometer to measure the internal temperature, the FSIS said.

Of the 28 people infected with E. coli from the outbreak, eight are in Massachusetts; four each are in Connecticut and New Hampshire; two each are in Maine, Pennsylvania and South Dakota; and one each is in California, Maryland, Minnesota, New Jersey, New York and Vermont, according to the CDC.