Fall back -- time change is this weekend 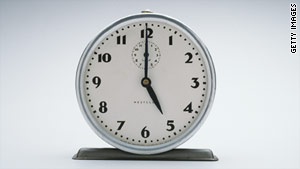 (CNN) -- It's time to "fall back" again. At 2 a.m. Sunday, you'll have to turn your clock back one hour, because it's the end of daylight saving time.

If you're in the United States, it applies to you -- unless you're in Hawaii and some parts of Arizona. Those are the only parts of the 50 states that don't observe daylight saving time. The territories of Guam, Puerto Rico, U.S. Virgin Islands and American Samoa do not observe it either.

Officially, it's all part of a system to reduce electricity usage by extending daylight hours.

Isn't it a little late this year? As of 2007, daylight saving time begins in the U.S. on the second Sunday in March and ends on the first Sunday in November. That was part of the Energy Policy Act of 2005, which President George W. Bush signed into law four years ago.

As for the original concept, thank Benjamin Franklin. He came up with the idea of daylight saving time in 1784.

You may get an extra hour of sleep on Sunday morning, but too much isn't necessarily the best thing. Too much sleep may be making you tired, CNN reports.