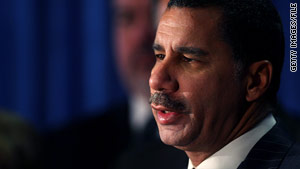 The announcement, which comes on the heels of President Obama's declaration of H1N1 flu as a national emergency, expands the categories of health care professionals who can give the vaccine to include dentists, pharmacists, podiatrists, midwives and emergency medical technicians, the executive order said.

At a news conference Thursday afternoon, Paterson stressed that his order is not intended to incite panic but rather allocates the necessary resources to effectively combat H1N1 flu, also known as swine flu.

"If an enormous number of flu vaccines came into the state because of an epidemic and an emergency and we need to administer them as widely as possible, we have expanded the health care personnel who would be deemed to have the authority to administer the flu vaccine," Paterson told reporters.

Under current state law, some health care professionals are prohibited from delivering the vaccine because of limits on their professional duties. The governor's order waives any law that would prevent these people from giving vaccinations, according to Claire Pospisil from the New York state department of health.

"It's called an emergency declaration, but what it does is that it provides New York the capability that once vaccine supplies become more available, it allows (health departments) to quickly vaccinate as many people as possible," Pospisil said.

Dr. Mark Feldman, a retired dentist who serves as executive director of the New York State Dental Association, which represents 75 percent of the dentists in the state, said he would be more than willing to help administer the vaccine.

"If there is a shortage and they need more hands, I can do my part," Feldman said.

Health care professionals named in the executive order may not administer the vaccine at their individual practices. Rather, they must do so at a New York state health department distribution center.

Feldman thinks it would be wiser to allow these health care professionals to distribute the vaccine at their private practices. "If there is a severe outbreak, to go to a mass distribution center, you risk being exposed," Feldman said.

About 800,000 people in New York City became infected with the disease during the first wave of the virus last spring, according to the New York City Department of Health

The New York health department will provide training for administering the vaccinations, though the exact amount of training required is yet to be determined, according to Tom Dunn of the New York state education department, which issues vaccine licenses.