NEW YORK (CNN) -- New York public health workers will no longer be required to be vaccinated against both the seasonal and H1N1 flu virus, state officials announced Thursday, prompted by a vaccine shortage. 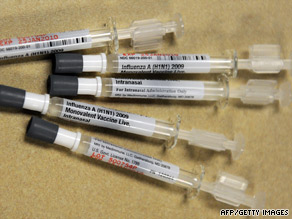 New York health workers will not receive mandatory flu shots due to a vaccine shortage.

Daines had originally said that public health workers must be vaccinated for the seasonal flu and the H1N1 virus, also known as swine flu, by November 30 or risk discipline.

The vaccine shortage has defused the conflict.

The federal government had told states that, by the end of October, an estimated 120 million doses of the H1N1 vaccine would be readily available, according to Paterson and Daines. But the Centers for Disease Control and Prevention will have only about 27.7 million doses of the vaccine at month's end.

Watch how current flu outbreak compares to years past »

"The CDC acknowledged that New York would only receive approximately 23 percent of its anticipated vaccine supply," Paterson said. "As a result, we need to be as resourceful as we can with the limited supplies of vaccine currently coming into the state."

Those particularly at risk, and who are at the forefront of receiving both the seasonal flu and the H1N1 vaccines, are pregnant women and people 6 months to 24 years old, the news release said.

The CDC also recently reported that increased demand has led to a shortage of the seasonal flu vaccine, according to Paterson's statement.

All About Influenza • Swine Flu