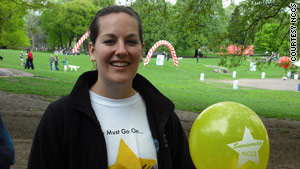 Anne Willis, 27, had cancer when she was 15, but says that's not the reason she's not married.
STORY HIGHLIGHTS
RELATED TOPICS

(CNN) -- Three years ago, Anne Willis mentioned to the man she was dating that she didn't know about her fertility, since she had undergone cancer treatment as a teenager. His response --"Oh, so you don't know if you're going be able to have kids?" -- was off-putting.

"He wasn't trying to mean anything by it, but I felt a little less desirable at that moment," she said.

Willis has generally had only positive experiences talking with potential romantic partners about her cancer history, but knows other survivors who have struggled much more with it.

Research recently published in the journal Cancer Epidemiology, Biomarkers & Prevention found that adults who are childhood cancer survivors are 20 to 25 percent less likely to marry compared with their siblings and the American population. The trend held across all age groups over 25 years old, the authors wrote.

Willis, who directs survivorship programs at the National Coalition for Cancer Survivorship, was 15 years old when she learned she had Ewing's sarcoma, a rare cancer that located in the soft tissue outside of her skull. She went through two years of chemotherapy, four surgeries, and six weeks of radiation to eradicate the cancer.

Now 27, she says her cancer is not the reason she's unmarried, but she finds the study results somewhat unsurprising. Surviving cancer means going through treatment as well as dealing with medical issues that continue to arise, and psychological and social issues. Given all of that, sometimes survivors are not able to deal with dating, she said.

"These issues aren't addressed," she said. "There's this incredible opportunity for survivors to get with their health care team and make sure those issues are being discussed, that there's a plan so that they can deal with them, and that resources can be identified," she said.

Researchers used data from the Childhood Cancer Survivor Study, which encompasses thousands of childhood cancer survivors who are now adults and were treated at 26 institutions in the United States. This study focused on about 9,000 adult survivors of childhood cancer, and nearly 3,000 siblings of participants.

"We have some real-life indicators that the life experience of survivors is not where we'd like it to be," said Dr. Nina Kadan-Lottick, assistant professor at the Yale School of Medicine and co-author of the study.

The study corroborates what other researchers found among cancer survivors in Britain in a 2007 study, which compared patients with the general population but did not include siblings in the analysis.

In both that study and the new one, younger age when the disease was diagnosed and history of cranial radiation were the most important predictors of never getting married, the study said.

About 80 percent of children with cancer will survive at least five years after their diagnosis, the study said.

Childhood cancer did not seem to be correlated with an increased risk of divorce, the study authors said. Survivors divorced at similar frequencies to siblings and to the U.S. population at large.

Certain cancers were more associated with not marrying than others, the authors found. Patients who had brain tumors as children were 50 percent more likely to never marry, the study found. For leukemia patients, the probability of never marrying was higher for those who received cranial radiation, but not for the ones who received chemotherapy only.

Why childhood cancer survivors may be single

It's not surprising that short stature would be associated with childhood cancer, said Dr. Donald Durden, research director in the division of hematology/oncology at the Moores UCSD Cancer Center in La Jolla, California.

"When you irradiate a young child's brain, say less than 5 years old, you hit the pituitary gland, which controls growth hormone production," he said.

Some forms of chemotherapy also affect a child's progress through puberty, which in turn might result in short stature, Kadan-Lottick said.

People with short stature have been identified in non-cancer populations as less likely to be married, Kadan-Lottick said. But further research is needed to determine exactly why -- whether it's because people perceive shorter individuals as less attractive, or it's that shorter men and women lack the social skills to overcome their stature, or other reasons, she said.

Psychologists say processing speed is important for social relationships, even at the level of having a conversation, she said. That's because people need to understand what their partners are saying in real time and respond in a meaningful way.

"This may also be an indication -- a wider indication -- of being able to get your life in order, so to speak, to live independently, to do things like get married and live your own life," she said.

But researchers did not directly ask participants why they did or did not get married, Kadan-Lottick said.

Willis noted that there is still a stigma against people who have had cancer, and sometimes survivors struggle with when to tell other people about their cancer history -- if at all.

Some may also feel disconnected from others around them, and find comfort in meeting other survivors. Willis recalls a moment when she and a colleague with lung cancer were discussing rashes they'd had because of their respective cancer treatments, and then another co-worker chimed in about a rash from his treatment.

"As we're sitting around talking about our rashes, that was the first time that I actually felt like other people understood what I had gone through," she said.

Many of the side effects of cancer treatment are amenable to intervention, Kadan-Lottick said. There are ongoing studies to improve cognitive functioning, and computer programs that can teach the brain to process better. More targeted cancer therapies that would reduce side effects are under development, Durden said.

Growth hormones may also help survivors grow taller during puberty, although their use is somewhat controversial, Durden said.

The majority of cancer survivors are not getting specialized survivor care after their treatment ends, she said.

"They perceive the cancer more as an episode in their life, and that they're entirely done, and so they're not really benefiting from the possible interventions or screenings that could be done."

It remains unknown why children may have markedly different side effects from the same cancer therapy, he said. Some come out of radiation therapy with much more severe cognitive problems than others, even though the treatment is the same, he said. Children also respond differently mentally.

"Each of these kids is an individual, and probably some have more psychology trauma from their therapy, from being diagnosed with cancer from an early age, than others, depending on how they were supported," he said.