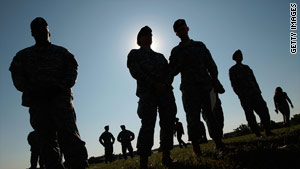 An estimated 6.8 percent of the adult American population has had PTSD at some point.
STORY HIGHLIGHTS
RELATED TOPICS

New Orleans, Louisiana (CNN) -- Post-traumatic stress disorder may be a condition of the mind, but research has implicated it in the ills of the body. Now, a new study suggests it may be associated with death after surgery.

The study shows that veterans with PTSD were more likely to die within a year after surgery than those without the disease, regardless of how many years had passed since their service. The study was presented at the annual meeting of the American Society of Anesthesiologists this week.

This is the first research to examine the mortality of patients with PTSD after surgery, said study author Dr. Marek Brzezinski, anesthesiologist and assistant professor at the University of California, San Francisco.

"If you consider that perhaps more and more patients are coming, and they're going to be with us for years to come, this is obviously a huge field that needs to be addressed," he said.

People develop PTSD, an anxiety disorder, in response to a traumatic event. Symptoms, which include intrusive memories, social withdrawal and increased anxiety or emotional arousal, typically begin within three months of a traumatic event, according to the Mayo Clinic.

Researchers focused on male patients treated between 1998 and 2008 at the VA San Francisco Medical Center. These patients had their first elective noncardiac major surgery requiring hospital admission during that time. The authors relied on information that was already recorded and did not interview any patients.

One year after surgery, 8.5 percent of the patients with PTSD had died, compared with 6.8 percent of patients who did not have the psychiatric disorder, representing a 25 percent increased risk for those with PTSD. The researchers did not find substantial differences in mortality among the kinds of surgeries that patients had.

Researchers also noted that the patients with PTSD tended to be younger; the average age for them at the time of surgery was 59.2 years old, while the average non-PTSD veteran was 66.3.

The study was retrospective and was not designed to see whether it was the PTSD, the surgery, or some other underlying factor that most influenced the patients' deaths, Brzezinski said.

But a follow-up study that he and colleagues are working on will look at the issue prospectively, following the outcomes of patients with and without PTSD as they go through surgeries. Participants will be tested for PTSD before and after surgery, and researchers will chart any complications that arise.

Another possibility is that the condition itself, which involves the major stress systems of the body, leads to a worse recovery from major surgery, he said.

Liberzon and colleagues are analyzing data of patients to see whether people who undergo vascular surgery are more likely to develop PTSD after. The surgery itself is less traumatizing than the overall experience of fearing death and undergoing associated procedures, he said.

For example, aortic surgery requires both physical stress and pain. There is also a threat of death, as patients have this surgery to avoid aneurysms. "All of those components can contribute to the development of PTSD, rather than the simple fact of going into surgery," he said.

Unlike the normal stress of everyday life, people with PTSD experience lifelong stress that changes how they perceive everything, Brzezinski said.

"One patient told me, for example, he feels like being in a cage with a tiger, and it's permanent stress," he said. "This obviously changes how patients perceive everything, how their body works."

It is well established that stress is associated with poor outcomes of surgery, Brzezinski said. Patients with PTSD may also have elevated stress hormones, which could increase their chances of other conditions such as heart disease and diabetes, he said.

PTSD is also associated with poor compliance, meaning patients may be less likely to take their required medications or see a doctor when they need one, he said.

It's important for physicians to treat PTSD not only as a mental condition, but also as an independent risk factor for other health problems, Brzezinski said.