How to choose healthy, ocean-friendly fish 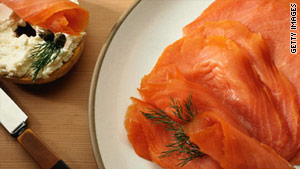 Some fish have higher levels of mercury and other toxins than others.
STORY HIGHLIGHTS
RELATED TOPICS

(Health.com) -- Salmon, tuna, and other fish are loaded with heart-healthy omega-3 fatty acids, so they must be good for you, right? Not so fast--some types of fish have more mercury than others, and others are harvested from the ocean or farmed in a way that's harmful to the environment.

Now, a new list has come to the rescue: It sorts through the confusion by rating fish in terms of levels of omega-3 fatty acids, mercury and other toxins, and in terms of their sustainability or ocean-friendly status.

Other lists have looked at one or two of the factors, but ocean-conservation advocates at the Monterey Bay Aquarium, in California, looked at all three, including whether fish are caught faster than they can reproduce (overfished) or in ways that have a negative impact on the ocean. They included eight types of seafood on a "super green" list after working with researchers at the Environmental Defense Fund and the Harvard School of Public Health.

The list includes albacore tuna--as long as it is troll-- or pole-caught and from the United States or British Columbia. Troll-caught fish are lured using a hook and line towed behind or alongside a boat. It is considered an environmentally friendly technique because unwanted fish are released soon after the line is reeled in.

The Environmental Protection Agency and the Food and Drug Administration both provide information on mercury-contaminated fish, which are riskier for pregnant women. The four types of fish with the highest amount of mercury are tilefish from the Gulf of Mexico, swordfish, shark, and mackerel king, the FDA says.

A general rule is that smaller fish have less mercury than larger fish because large fish eat small fish, which can increase their mercury load.
-- Dr. Steven B. Feinstein

According to a report that accompanies the new list, consumers should ask whether seafood was wild-caught or farmed (and select one or the other depending on the type of fish) and shop at places that have policies or are working with environmental groups to purchase fish from sustainable sources. Such companies are Wal-Mart (which includes Sam's Club), Ahold USA (which includes Stop & Shop), and Giant Eagle.

However, Dana Greene, M.S., R.D., a nutritionist in private practice in Brookline, Massachusetts, notes that even if you have the list, it isn't always easy to figure out if you are buying the fish that are on it.

Albacore tuna may be on the list, but that doesn't mean a can of albacore tuna at your local grocery is a good choice, she stresses. "You really can't know where that tuna is from or how it was caught by looking at a can," she says. Her recommendation is to try to eat fatty fish that are low in mercury three times a week. "If it is a fish like canned tuna that has higher mercury levels, eat it no more than one time a week," she suggests.

According to the FDA, canned light tuna is relatively low in mercury; canned albacore tuna (sometimes called "chunk white") and fresh or frozen tuna, however, have higher amounts.

"A general rule is that smaller fish have less mercury than larger fish because large fish eat small fish, which can increase their mercury load, and canned fish have higher mercury levels than non-canned fish," says Dr. Steven B. Feinstein, a preventive cardiologist at Rush University School of Medicine, in Chicago, Illinois.

The term farm-fed does not always mean healthy, he says. "Some farm-fed fish may be fed with other fish parts so they can have high levels of mercury too," he explains.

By and large, eating more fish is a good thing, he says. "Fish oils reduce dangerous blood fats known as triglycerides, and...fish is a good substitute for other artery-clogging protein such as red meat," he says.

Read the full list of sustainable fish from the Monterey Bay Aquarium.