(CNN) -- Cowering in a school restroom stall, young Charles D'Angelo would eat his lunch alone to escape classmates bullying him about his weight. A woman at his Catholic school's rectory let him watch the news with her during his break instead of playing outside. 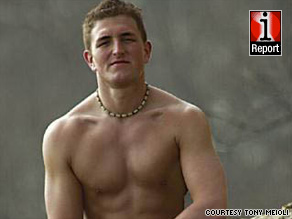 After losing 160 pounds, Charles D'Angelo got a shirtless picture of himself shown in Cosmopolitan.

During high school, he got a doctor's note to excuse him from physical education. After years of overeating and under-exercising, he ballooned to around 360 pounds and felt depressed.

But before-and-after photos he posted on iReport.com show how the St. Louis, Missouri, resident transformed himself from overweight teen to muscular man. Now a fitness coach, his mission in life is to make exercise fun so that kids will want to stay healthy.

"I'm not saying 'poor me,' but I went through a lot of pain and terrible days," D'Angelo said. "I do believe that if my story can help others, then I'll do what it takes."

The need for better health habits seems greater than ever. More than 17 percent of youths ages 12 to 19 were estimated to be obese after a 2003-2006 Centers for Disease Control and Prevention study. That number was just 5 percent in the late 1970s.

When D'Angelo was 17, he decided to get in shape. He initially focused on weightlifting and gym workouts to build up his muscles, calling the iPod one of the best products ever invented for those seeking to get fit. Growing up in an Italian family had taught him that food and emotions go together, whether at weddings or funerals. He used to munch on junk food during recess, but as he got older, he forced himself to eat planned, healthy meals. iReport.com: Shedding pounds, becoming a fitness coach

At 23 years old and a muscular 204 pounds, he has kept his excess weight off for five years and sports a rippling six-pack. He says he even got a shirtless photo of himself showcased in Cosmopolitan magazine. He hopes his success will make him a role model for obese kids, and he tries to come up with fun and supportive ways of exercising.

"I was just scared to death of being tested or compared. I don't think we should measure people based on how many push-ups can you do, how many sit-ups can you do."

Keeping exercise fun and personally fulfilling is key to helping him stay with his workouts for the long haul. He enjoys watching TV while he works out. Boot camps and other group activities provide the camaraderie he craves.

One of his clients owns a local gym that "looks like an arcade," which he points to as an example of another way of giving exercise a better image. Wii Fit and Dance Dance Revolution stations are available. D'Angelo also said he feels he would have benefited from more-structured eating habits and routines as a child.

Anything that gets the body moving can be good exercise, said Janet Fulton, a CDC epidemiologist. The government recommends the equivalent of 150 minutes of brisk walking or other moderate exercise per week. The time spent can change based on the intensity of the exercise.

Whether exercise or nutrition are more responsible for increases in obesity over the last 30 years is unclear, Fulton said, but people seeking to lose weight should focus on both areas and pay attention to what they eat. She suggested doing an enjoyable exercise in the company of others. iReport.com: What's your fun exercise?

"Find a buddy, even if you're walking your dog. You cannot only do that, but do it with your family. Be a member of the team and get your social support that way."

Over time, D'Angelo developed confidence, and he says he wants to help others do the same. Dating seemed to be out of the question when he was heavier, but he now has a girlfriend. He says losing the weight and building his confidence have gone hand in hand.

Many other iReporters said they also felt bad about exercise as kids and posted their own ideas for pleasurable alternatives that could help beat obesity.

Staci Lambert-Westcott of Stephens City, Virginia, took up exercise and fitness to help manage the diabetes she was developing. Getting married and having children made maintaining her weight a challenge. When she got up to 247 pounds and at age 29, she decided to get fit.

Now 37, she recalls getting an ego boost after losing a significant amount under the cover of winter clothing. When spring came, a neighbor thought Lambert-Westcott's husband had a new woman in his life.

Throughout her personal weight-loss journey, she learned to get over her childhood dislike of exercise. As she lost pounds, she grew more comfortable exercising in public.

Lambert-Westcott got to know the owner of her gym and eventually bought the business from him. She had always dreaded going to physical education class, so she tried to offer fun options for women when she was in charge. iReport.com: Bought the gym, lost 135 pounds

"The classes were extremely popular because they were fun, and mom and daughter could come together. While mom was working out, daughter was working with a coach in the back."

Though she eventually sold the gym to go back to school, she continues to work out and maintain her healthy weight.

Keeping the pressure off workouts is key, said fellow iReporter Jonathan Lund, 35, of Duluth, Minnesota. As a fitness trainer at a hospital, he works with everyone from elite athletes to patients at the facility. His experiences as an overweight teen helped show him how to help others be healthy.

"I have to remind myself, it took a lot of work to get these people out of the house and into this club," he said.

He grew up self-conscious about excess weight and felt like he couldn't keep up with the other kids. Individual activities such as running helped him take off the weight.

"I never thought I could play sports or do anything like that. I always felt really intimidated by that. I also didn't like the aspect of team sports because it wasn't much of a workout because usually, you'd be sitting on the sidelines and you'd play for five minutes." iReport.com: Lund stops to post an iReport at a marathon

He now runs marathons but got his start walking and increasing intensity little by little. He describes the long-distance events as "addictive."

Along the way, Lund has battled a lot of negative thinking about himself. Despite the dozen or so marathons he's completed, including the Chicago Marathon on Sunday in Illinois and the recent Twin Cities Marathon in Minneapolis, Minnesota, Lund's insecurities have stuck with him into adulthood. He pushes forward anyway.

"I still feel like a fat kid, even though I'm not anymore," he said. "I feel like I have to keep running in order to keep up. But at the same time, it's the best therapy that there is. All that negative stuff gets worked out in your mind."

All About Obesity • Weight Loss • Exercise and Fitness