NEW YORK (CNN) -- A New York judge denied a request Wednesday for a temporary restraining order barring the state from mandating flu vaccines for health care workers but left open that possibility pending another hearing on the matter next week. 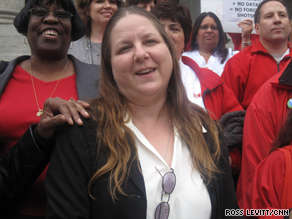 New York State Health Commissioner Richard Daines has mandated that workers who have contact with patients be vaccinated for seasonal flu and the H1N1 variety, also called swine flu, or face losing their jobs.

Upstate New York nurse Sue Field objected to the mandate, saying that only the state legislature has the power to enact such a mandate and that the mandate is too narrow, since it allows an exception only for medical reasons.

Field has a note from her doctor saying she had side effects from the seasonal flu shot in 2007, but the Health Department deemed the note insufficient because the symptoms were not among a list of severe symptoms, such as an allergic reaction. Field said she has not been vaccinated since 2007.

In Wednesday's hearing, Judge Marilyn Diamond refused to issue the temporary restraining order but said she would hear further arguments on the matter next week when she considers a request for a preliminary injunction against the mandate.

In an "open letter to health care workers" released last month, Daines argued for the mandated vaccinations because of "our noble commitment to the tradition of putting patients' interests first."

"Given the outstanding efficacy and safety record of approved influenza vaccines, our overriding concern then, as health care workers, should be the interests of our patients, not our own sensibilities about mandates," wrote Daines, a medical doctor.

Neither the Centers for Disease Control and Prevention nor the World Health Organization issued mandates for vaccinations, but federal authorities put health care workers among the first to be offered the H1N1 vaccine, along with pregnant women, caregivers to infants, children and the chronically ill.

The CDC recommended flu shots for health care workers, asking medical offices to provide flu shots "at no cost to your staff."

New York is the only state mandating the vaccines.

Several members of the New York State Nurses Association, which backs Field's legal action, attended the hearing and held signs in support of her outside the courthouse.

"The recently adopted emergency regulation ... has serious flaws that warrant its withdrawal," the group said in a statement on its Web site.

The association encourages health care workers to get the vaccination but supports the right to choose not to get it.

Several other groups and individuals have joined the nurses association's calls for Daines to withdraw the mandate.

But other groups say the greater good is more important the individual objections.

Donohue said that the New York State Health Department is world class and that the potential for a major H1N1 pandemic remains.

"This is an issue which is extremely important," he said. "It's serious stuff."