WEST PALM BEACH, Florida (CNN) -- Leslie Elder's eyelids fluttered open, and through the fog of pain medication, she saw the emergency room doctors pull back the curtain in her room. 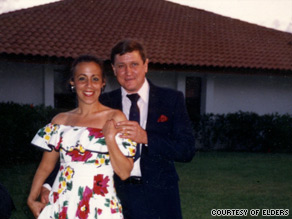 Leslie and Jim Elder say they were forced to cancel their health insurance.

She could tell that the news was bad.

"They didn't have to say a word. I knew from their faces that something wasn't right," said Elder, 60, who hours earlier had stumbled into the ER with a stabbing pain in her abdomen. "Then one doctor said, 'Your right kidney ... it's breaking apart. You have a tumor ... and you also have a tumor in your left kidney.' "

The words "You have a tumor" were not new to Elder; her grim financial situation was.

Elder had cancer twice before -- in 1988, doctors found a tumor in her right breast, and in 2001, they found one in her left breast -- except back then, she was insured. By the time she learned that she had kidney cancer in September 2005, she was uninsured.

"All I could think of was 'Oh, my god, I'm going to go broke. We'll be living in a cardboard house,' " Elder said. " 'How am I going to do this?' It was the most honest feeling of powerlessness."

Elder and her husband, Jim, say their health insurance carrier, Nationwide Insurance, forced them into an impossible situation by raising the rates on their policy over several years. Eventually, they were forced to cancel.

"Nationwide denies any inference that the company inappropriately raised rates for the coverage that was provided from 1987 until the time the Elders canceled the policy," spokeswoman Liz Christopher said in a statement.

The Elders boil it down to health insurance companies putting profits ahead of human life.

Watch more on the Elders' struggle »

"The insurance companies are choosing who will live and who will die," Leslie Elder said.

Nationwide Insurance says it did not break any law by increasing the Elders' insurance premium.

"Health insurance rates were and are highly regulated by various state insurance departments, and any premium increases for the Elders and other policyholders would have been made in full compliance with state laws in effect at that time," Christopher said.

The Florida Department of Insurance Regulation, which oversees companies like Nationwide, said in a statement, "There is no law that limits the amount of rate requested by an insurer." Insurance officials add that their office reviews all rate requests, ensuring that the requests are not excessive or discriminatory.

The Elders bristle at the notion that their experience could be cast as anything but "excessive" and "discriminatory."

Health care bills before the Senate and House are designed, in part, to rid the market of health care discrimination, especially as it relates to pre-existing conditions like Elder's cancer.

Zirkelbach says the industry agrees with removing pre-existing conditions from consideration for pricing policies but stresses that reform should not come by way of raising taxes or cutting benefits for other programs like Medicare.

The Obama administration has said repeatedly that health care reform would not cut benefits or raise taxes.

The Elders are not hopeful that health care reform -- even if it excludes pre-existing condition clauses from health insurance policies -- will help them any time soon.

According to the bill currently before the House, it will be 2014 before self-employed families like them will actually have access to health insurance. By then, Elder will be near eligibility for Medicare.

While the debate in Congress continues, Elder says she is waiting anxiously -- waiting for reform, and for her cancer to come back.

The Elders did not always have such a contentious relationship with their health insurance carrier, and they were not always broke. In fact, before their insurance troubles, they were solidly middle-class business owners.

However, in 1988, things began changing. It was the year of Elder's first breast cancer diagnosis. When the family's plan required payment of a $250 deductible and a 20 percent share of the costs of medical care, the Elders could afford it.

Years after that first diagnosis, things started getting shaky. Jim Elder says the premiums crept up slowly at first and then more dramatically.

"You do ask why, why, why," Jim Elder said. "Why are we stuck with all these huge bills when we're supposedly covered?"

A recent Kaiser Family Foundation study examining U.S. health insurance policies generally found that from 1999 to 2009, the average family premium more than doubled. The Elders say that over the life of their Nationwide Insurance policy, their premiums nearly quadrupled.

The Elders believe that their health insurance premiums soared higher than those of the average family because of Leslie's previous cancer diagnosis.

"What is the message here? Survive cancer but then go drop dead because we can't make any money off you anymore?" Leslie Elder asked. "[The insurance companies] figure, 'You're useless. Get lost.' "

Nationwide says, "While we're empathetic to the Elders' situation, we stand by the policy coverages provided to the Elders while they were customers."

To cope with high premiums, the Elders played a precarious, yet common, game. They increased their deductible to offset the high premiums. By the time Leslie Elder got breast cancer for a second time, in 2001, the family's deductible was up to $5,000.

What happened next would send shock waves through the Elder household.

"As I'm recuperating, I receive $21,000 of bills that I was responsible for," Leslie Elder said. Under the Elders' policy with Nationwide they did, in fact, owe so much, in part because of rising health care costs, and in part because their deductible was now so high.

She was stunned and confused -- not just about the bills but about how they were going to pay. What still confounds Leslie and Jim Elder: How the cost of medical care, and medical insurance, went sky high in just over a decade.

Late in 2001, the Elders were scrambling for affordable coverage. They dropped their policy with Nationwide Insurance and signed up for a more affordable policy with Aetna, by starting a group policy including employees in a small business they were running at the time. Eventually, Aetna would increase the Elders' premium to nearly $1,000 per month. It was too much. In 2005, the Elders dropped their health insurance policy for the second time.

In a statement, Aetna said that Leslie Elder's previous cancer diagnoses were not the culprit for the rate increase.

Zirkelbach said, "Everybody who has health care coverage should have the peace of mind that their coverage is going to be there when they need it. We have proposed to eliminate pre-existing condition exclusions entirely so that everybody has peace of mind that coverage will be there, that they won't be paying based on their health status."

Through it all, there was one bright spot: A generous family member paid the more than $80,000 in hospital bills stacked up during Leslie Elder's 2005 kidney cancer treatment. Still, the family is struggling to pay down the bill of more than $21,000 from 2001.

Leslie Elder says that even if she could afford it, because of her pre-existing condition, she is "uninsurable." Without coverage, she cannot afford follow-up exams for cancer, so Elder has no idea whether her cancer has come back. In a strange way, she says, not knowing is better.

"I don't think I could bear to listen to those words again. ... 'You have cancer,' " Elder said. "I've said to my husband, if I start to get sick, just set me up with a nice pill cocktail on a beach, because nobody cares. That's the message you hear every day from insurance companies."