LONDON, England (CNN) -- A leading UK hospital has defended its practice of using organs donated by smokers after the death of a soldier who received the cancerous lungs of a heavy smoker. 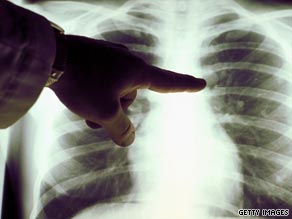 A close up X-ray view of a cigarette smoker's lungs.

Corporal Matthew Millington, 31, died at his home in 2008, less than a year after receiving a transplant that was supposed to save his life at Papworth Hospital -- the UK's largest specialist cardiothoracic hospital, in Cambridgeshire, east England.

The statement added that the hospital had no option but to use lungs from smokers as "the number of lung transplants carried out would have been significantly lower," if they didn't.

Should hospitals use smokers' lungs in transplants?

An inquest held last week heard that Millington, who served in the Queen's Royal Lancers, was serving in Iraq in 2005 when he was diagnosed with an incurable condition that left him unable to breathe.

He was told he required a transplant and in April 2007 received a double lung transplant at Papworth Hospital.

Less than a year later, doctors discovered a tumor in the new lungs. Despite radiotherapy, Millington died on February 8, 2008, at his family home near Stoke-on-Trent, in Staffordshire.

The inquest found a radiologist failed to highlight the growth of a cancerous tumor on the donor lungs.

Tests found that he had received the lungs of a donor who smoked up to 50 cigarettes a day, the inquest at North Staffordshire coroner's court heard.

"Patients who are accepted on to the transplant waiting list have no other option open to them, however, we must stress that all donor organs are screened rigorously prior to transplantation.

"Using lungs from donors who have smoked in the past is not unusual. During 2008/09 146 lung transplants were carried out in the UK.

"During the same period 84 people died on the waiting list. If we had a policy that said we did not use the lungs of those who had smoked, then the number of lung transplants carried out would have been significantly lower."

The tumor's growth was accelerated by the immuno-suppressive drugs Millington was taking to prevent his body rejecting the transplanted lungs, the inquest heard.